The latest generation of server processors, launched this April after two years of delays due to manufacturing troubles, were intended to offer some relief for Intel. Code-named Ice Lake SP, the new Xeons pack a much bigger punch than the previous generation, with up to 40 enhanced processor cores on a single chip (28 in the previous generation, Cascade Lake), and deliver a 30 percent to 50 percent performance uplift across a wide range of workloads — even more for vector operations, making them attractive for high-performance computing. In general, these processors are great for workload consolidation and demanding business applications, such as transaction processing and analytics.

There is a catch, however. For the past 15 or so years, every new server technology generation has delivered a leap in efficiency across the board. The new Intel server chips are not only late, but also appear to break this pattern. Servers equipped with Ice Lake SP do not bring the customary energy-efficiency benefit that the IT industry has come to expect. In fact, the industry standard server power efficiency benchmark SPECpower (established by the Standard Performance Evaluation Corporation) shows significant regression in efficiency compared with the previous generation. Some of this is due to recent code changes in the Java engine the benchmark uses, but even when this is factored in, the change in efficiency (or rather the lack thereof) does not paint a favorable view. 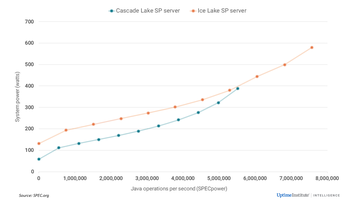 Figure 1. Ice Lake SP servers can use more energy to do the same amount of work – Uptime Institute

The bottom line is that the Ice Lake SP is unusually power hungry for a chip made with more advanced manufacturing technology, referred to by Intel as 10-nanometers (technology designations between chipmakers are not comparable). Apparently, this is because Intel has been forced to push beyond the new chip’s electrical comfort zone in a drive for higher speeds to match or exceed previous generation products. This, in turn, drives supply voltages and currents disproportionately higher — literally dissipating any energy efficiency advantage it might have started with. Even though there is some room for optimizing Ice Lake chips for efficiency, trading off some peak performance by slowing the cores down to operate closer to their sweet spots, the overall gains will, in most cases, be incremental at most. In the interest of speed and responsiveness, Intel also guides server makers to turn off an energy-saving feature to keep Ice Lake server chips always primed. This contributes to major increases in power consumption even at low utilization.

For a data center IT sector that relies on Intel’s supply for the vast majority of its server processors, this is problematic. Cloud operators in particular will find the lack of efficiency progress unpleasant, as it directly affects their bottom lines, while they are at the same time under enormous pressure from their own management, and from regulators in Washington, Brussels, Singapore and Tokyo, to demonstrate progress in sustainability. Previous Uptime Institute reports (see Beyond PUE: Tackling IT’s wasted terawatts) have concluded that timing server refreshes appropriately is an important aspect of managing overall data center energy use.

Coincidentally, rival server chip vendor AMD (along with its manufacturing partner TSMC) has risen to challenge Intel in the data center at the right time. Its processors offer far greater energy efficiency and performance density — more than 50 percent higher total performance for about 20 percent less energy than Ice Lake-SP in the SPECpower benchmark — making it ideal for cloud and aggressive enterprise workload consolidation. Also, hyperscale cloud provider Amazon Web Services (AWS) has ramped up mass deployments of servers using its own chip family, Graviton, in a bid to vertically integrate more of its technology stack for differentiation and, longer term, to drive costs further down. While there is no publicly available efficiency data on Graviton2, the AWS chips are made with the same TSMC technology as AMD’s server chips, which indicates low energy use and strong efficiency for select applications.

Nonetheless, Intel still retains a vast lead in processor making capacity, while AMD is restrained by chip supply for the time being as it gradually increases production orders at TMSC; and Graviton is available only to AWS. For this reason, the near-term prospects for improving energy efficiency in the data center sector continue to hinge on Intel’s ability to deliver on its mission. It will have another shot within 12 months.