Teraco to expand Joburg campus, and build in Cape Town

The company made the two big announcements last week

CT2 will have eight data halls adding up to 8,000 sq m (85,000 sq ft) - nearly three times the size of the existing CT1 facility. The CT2 data center will also be able to provide its clients with direct access to the South African Internet Exchange Point (IXP), NAPAfrica, which services over 20 countries on the continent.

Jan Hnizdo, CEO of Teraco, said: “Proximity to the cloud, ecosystems and the consumer market is vital in new digital architecture as enterprises move their applications into the cloud and transform their businesses." 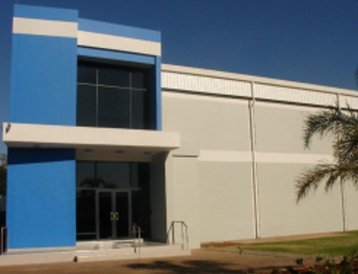 The exterior of one of Teraco's data centers in Johannesburg

The 30MW facility follows the company’s recent 60MW expansion of its Isando Campus, Johannesburg, where it houses two data centers, JB1 and JB2. Teraco announced last week it was to invest 4bn Rand ($210,000) to expand the campus.

The plans will be funded by shareholders including private equity firms Berkshire Partners and Permira Holdings, while Teraco will draw down on a committed funding line from lender Absa Group, according to Tech Central. Berkshire Partners invested in Teraco in 2019.

Teraco says the Cape Town investment is a return to what it calls its "mother city": CT1, in the Rondebosch area of the city was its first data center, more than a decade ago. Since then, the company has been expanding its foothold into Joburg and Durban. DCD reported on the company's last Cape Town expansion project in March 2018.

Hnizdo added: “This new investment in the mother city is special for us. To date, CT1 has seen four expansions since launching; the historic building currently has sufficient capacity until the new site is brought to market.

Driving this investment, according to Hnizdo, is increased demand from cloud providers, enterprises, and subsea cable operators seeking to better locate their data center infrastructure.

Construction on the site commenced in early March 2020 and is expected to be completed in late 2021.

Hnizdo said: “Enterprises can deploy their public, private, and hybrid cloud strategies on Platform Teraco, which allows for complete freedom of choice from a cloud provider perspective, as well as significantly reducing the time and cost for enterprises to access these cloud platforms.”