The company says the new buy is a hidden gem

Africa Data Centres' move to acquire the Samrand data center in Johannesburg, South Africa, has been ratified by the country’s Competition Tribunal.

First reported by Mybroadband.co.za, Africa DC acquired the data center off of South African financial company Standard Bank for an undisclosed sum. Official documents reveal, however, that the deal struck is actually a merger between Africa DC and The Rental Enterprise, a group which "owned" the Samrand data center and the land itself. 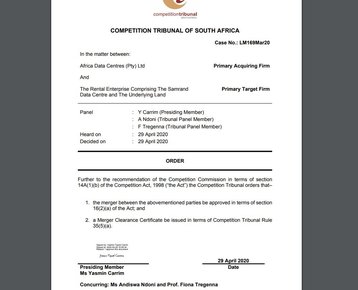 Africa DC applied to the Competition Tribunal for approval to buy the data center on March 6 and announced its plans on April 7. The tribunal has approved the merger unconditionally.

Stephane Dupraz, CEO of Africa Data Centres, said: "The unique combination of this outstanding facility with Africa Data Centres’ certified operational excellence makes it the ideal choice for the most demanding organizations, particularly those in the financial services sector.

"We will open this hidden gem to the market, on an open-access basis, allowing any modern technology-driven organization to benefit from this outstanding facility."

Standard Bank said that it no longer requires the facility as it is moving to Amazon Web Services and Microsoft's Azure cloud.

Africa DC already operates one facility in the Johannesburg area, a 3,000 sq m (27,000 sq ft) site of around 7MW, while a new site is being built nearby. The company, part of the Liquid Telecom Group, also operates facilities in Cape Town, South Africa; Nairobi, Kenya; Harare, Zimbabwe; and Kigali, Rwanda. Africa DC also plans to open a data center in Egypt.