The new region has three geographically separate data centers or "availability zones" for resilience, and brings AWS to 23 regions around the world. 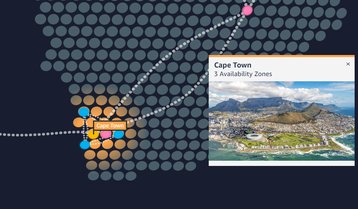 “We have a long history in South Africa and have been working to support the growth of the local technology community for over 15 years," said Peter DeSantis, senior vice president of global infrastructure and customer support, AWS. "In that time, builders, developers, entrepreneurs, and organizations have asked us to bring an AWS Region to Africa and today we are answering these requests by opening the Cape Town Region."

The Cape Town region was announced back in 2018, and AWS has another four announced data centers in the pipeline. An Italian region in Milan, also announced in 2018, is listed as "coming soon" on the AWS infrastructure page. A second Japanese region in Osaka is due in 2021, and a Jakarta, Indonesia region announced early in 2019 is due in 2022, while a Spanish region, announced in late 2019, is expected to be live in 2022 or 2023.

AWS Regions are made up of availability zones - each of which has one or more data centers, located far enough apart so that a single event will not affect them all, but close enough so that data can pass quickly between them all. The zones are connected by redundant fiber, and each one obviously has its own independent power, cooling, and physical security, with backup power and cooling to ensure it runs continuously. A full region should have three such availability zones.

The data centers comply with local security and data protection laws, including the Protection of Personal Information (POPI) Act. Widely seen as South Africa's answer to Europe's GDPR, it came into force in 2019, and businesses still have a grace period in which to comply. However, it was originally passed in 2013, so its creation actually predates the European measure.

POPI's principles are similar to protection regulations in other countries, including assuring that personal data is collected transparently and with consent. AWS' Cape Town region will enable companies to assure customers that their data is not leaving South Africa.

Amazon has been in South Africa since it set up a development center there in 2004, and later an AWS office in Johannesburg in 2015. The company brought AWS Direct Connect to the nation in 2017 offering direct links to the AWS cloud, and started building its own infrastructure in 2018, installing locations or its Cloudfront content delivery network (CDN) in Johannesburg and Cape Town, along with an edge location in Nairobi, Kenya.