Hyperscale operators spent "well over" $32 billion in the fourth quarter of 2019, according to Synergy Research Group.

The capex expenditure set a new record, marginally beating out the same time last year. For 2019 as a whole, hyperscale operator capex was up just one percent - but for the expenditure specifically targeted at data centers, that figure jumped 11 percent. 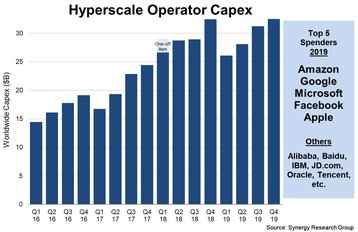 The top five hyperscale spenders in 2019 were Amazon, Google, Microsoft, Facebook, and Apple, who had far larger budgets than the rest. Other significant spenders include Alibaba, Tencent, IBM, JD.com, Baidu and Oracle.

The capex of Amazon, Microsoft, and Facebook grew notably, while Synergy notes that Apple's spend dropped off sharply, dragging down the overall figures.

Last year, Apple canceled a long-delayed Irish data center, and a slightly-delayed second Danish facility - while its first Danish site is also well behind schedule. In December, the company quietly filed for a five-year extension on the time it needed to build a data center in Iowa. The company has a $1.5 billion contract with Amazon Web Services, along with smaller contracts with Google Cloud and Microsoft Azure, and a significant footprint in colocation data centers.

The total number of hyperscale data centers reached 512 by the end of Q4, up from 504 in October. Synergy keeps its definition of hyperscale a secret, which is only revealed to paying customers. The research firm previously told DCD that the total cost of the facilities plays an important role in its analysis.

“As expected there was a significant boost in hyperscale operator capex in the second half of 2019, which helped to counter a relatively soft start to the year. Most notable was that annual spending on data centers grew at a double-digit rate despite total capex being somewhat flat,” John Dinsdale, a Synergy chief analyst, said.

“How will coronavirus impact this trend going forwards? While there are many unknowns, what is clear is that the hyperscale operators generate well over 80 percent of their revenues from cloud, digital services and online activities. The radical shifts we are seeing in social and business behavior will actually provide some substantive tailwinds for many of these businesses. These hyperscale firms are much better insulated against the current crisis than most others and we expect to see ongoing robust levels of capex.”