A rezoning request has been filed in Culpeper County, Virginia, that would pave the way for more than 700,000 sq ft 65,000 sqm) of new data center development.

David Martin, president of software development firm AttoTek, Inc has filed to rezone around 88 acres at his property along Brandy Road and Stevensburg Road in Brandy Station. 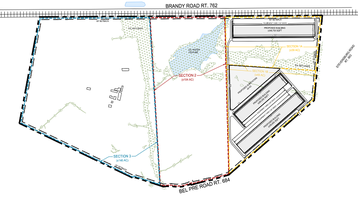 The land is currently zoned Rural Area (38 acres) and Commercials Services (50 acres) in the area’s development plan. The application seeks to rezone it to Light Industrial, under which data centers can be developed.

The Culpeper Star Exponent reports Martin pared back his original proposal to develop up to 940,000 sq ft (82,300 sqm) of data centers to around 765,000 sq ft (71,700 sqm). The project is reportedly known as the Brandy Station Technology Park.

The site isn’t currently served by public water and sewer systems, and the application notes any facilities built on site would use air-cooled and/or closed-loop systems.

The application notes a substation would likely also be built nearby to service the facilities. The land sits in one of the County’s technology opportunity zones, making it eligible for tax incentives from the county when developed.

“A data center produces a substantial revenue stream and jobs during construction, pays ample taxes thereafter, and the salaries of operational personnel once a data center is completed will materially exceed the average salary of current County residents,” it said.

In the meeting last week, Martin conceded no developer or tenants have been secured for the site and it is not currently being marketed. The S-E reports that the entire 351-acre property could eventually be developed over time with more than a dozen data centers covering more than 4 million square feet.

“We don’t have a builder ready to break ground,” Martin said during his presentation last week. “The main goal is to prepare this property to get the interest of data center builders.”

The rezoning request was deferred until next month as the planning commission had further questions about the project it wanted to address.

“The concept is ok, but it doesn’t satisfy me. It makes me ask more questions,” said Vice Chairwoman Cindy Thornhill, starting with the level of water runoff from the data center roofs and managing that.