Paris law firm Ziegler & Associates says around twenty OVHcloud customers have joined a class action to claim more compensation from OVHcloud, for losses caused in the disastrous fire which destroyed an OVHcloud data center in Strasbourg in March.

Ziegler says it is "starting the procedures to issue the OVHcloud formal notice" of a lawsuit in which it will represent customers of the French cloud service provider, who did not receive fair compensation, after a fire that destroyed the SBG2 data center in Strasbourg on March 10, and disabled a second facility on the same site.

Out of court negotiations?

The law firm will be signing up new clients for the case, and estimating their damages, before sending a formal bill to OVHcloud for those damages in March. After that, Ziegler and OVHcloud will negotiate, either settling the matter or taking it to court.

OVHcloud has told DCD that it has not yet received formal notice of the lawsuit, and repeated its earlier statement that a full report on the cause of the fire will be issued in 2022; a delay which meant the company's IPO proceeded in October with the full cost of the fire unknown, although OVHcloud's own filing estimated it could be as high as €105 million.

Ziegler, a specialist in collective actions, launched its class action in September, saying "The OVH cloud company had a contractual responsibility for storing and securing data with its customers. It is obvious that the company did not respect this obligation, OVH, therefore, committed a contractual breach. Thus, it is possible for you to obtain compensation on this basis [Google translation]."

Since then, the company has repeated an offer to act on behalf of OVHcloud customers who lost business and, in many cases, lost data, when the fire took place, saying OVHcloud's offers of compensation were inadequate, and unfair, given that all customers have had the same offer, despite some suffering worse losses than others.

Ziegler is charging €480 (plus 20 percent VAT) for participation, and will be entitled to five percent of compensation that is paid, according to a "clause de résultats" (results clause)..

Although OVHcloud says it has not had any formal notice of the claim, Ziegler says it has around 20 subscribers, the number it originally set itself, and so the case is going forward, according to a report in Le Journal Du Net.

"By offering compensation, OVHCloud implicitly recognizes its responsibility", Jocelyn Ziegler told JDN. "For the smallest client of this recourse ...the loss represents €10,000 ($11,200), while OVH offers barely the equivalent of €900 ($1,000) by offering its cloud free of charge for a few months."

As well as being too small, this offer is not fair, as OVHcloud is offering the same credit note to all customers, without assessing the level of damage each suffered, Ziegler told JDN.

The action is reported to have brought together two large companies, along with six SMEs and some smaller businesses, across industries including accounting, real estate, marketing, medical, and tourism. All remain anonymous, having signed a confidentiality agreement with Ziegler, putting the lawyer in charge of any future negotiation with OVHcloud.

Some companies lost data as well as business during the extended outage. "For the majority, it is about a loss of database. For example, an actor in the medical profession found himself without any information associated with the patients, from the pathologies to the prescribed doses," despite having paid for HDS certification, an optional extra for health data, according to Ziegler.

Ziegler has said it will estimate the damage suffered by each company, and in March it will issue a demand which asks OVHcloud for compensation on a case-by-case basis, including damage to the clients' brand image. Ziegler and OVHcloud will then negotiate.

OVHcloud might argue that the incident was "force majeure" or an act of God, for which the service provider is not responsible but Ziegler says this is not justified: "The event was foreseeable given the design of the site. It could also have been avoided or lessened, for example, if an automatic extinguishing system had been installed and if the optional backups had not been carried out on the same data center."

Ziegler is referring to reports that OVHcloud had manual, rather than automatic fire suppression systems, and used a construction involving wood and plastic. However, at this stage, no formal cause for the fire has been given by OVHcloud, although early in the response to the incident, OVH founder Octave Klaba did say that UPS systems were on fire.

OVHcloud has said it was unable to publish a report until 2022. The company has said the delay is because of the involvement of the French authorities and insurance companies - but the delay meant the full information about the fire has been kept under wraps until after the company's flotation on the French stock market, which took place in October. The company's shares opened at around €18.50 a share, and at the time of writing are worth €21.49. 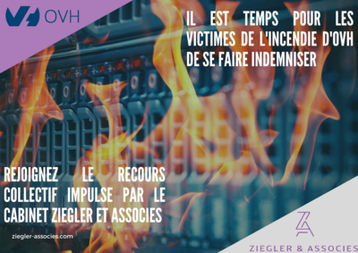 An OVHcloud spokesperson told DCD that the company has no formal details of this proposed class action, and very few customers have taken individual action against the company. Out of 120,000 customers, the number taking legal action under their own steam is small, we were told: "The amount of legal cases is limited because we've been treating the customers right."

Ziegler's site is still inviting OVHcloud customers to come forward and sign up. "As long as the demand letter is not yet sent, companies can still join the action," a spokesperson for Ziegler told DCD.

The company has said it will be assessing losses, based on the client's turnover before and after the fire, the number of lost customers, and losses in market share, as well as the time it took for data to be recovered, and the cost of any other services the client had to use during the incident to make up for OVHcloud's shortfall.

If there's no out-of-court settlement, clients could face another year of repeated court hearings.

"This compensation action is essential for all the companies that were victims of this fire, regardless of your size and your sector of activity," says Ziegler's site. "To be able to be compensated, it is therefore essential that you join the class action."