Today's fire which destroyed OVHcloud's SBG2 data center in Strasbourg has hit many websites, with some permanently losing data.

Sites that were hosted in the data center will have lost their servers, and may have lost live data which had not been backed up elsewhere. Sites that are still down at the time of writing include the prestigious Centre Pompidou arts center and library in Paris. news site eeNews Europe. Meanwhile, the dystopian survival game Rust says that the loss of 25 servers means some game data will never be recovered.

Security experts at Kaspersky pointed out that some malware threats which were hosted at OVH have gone offline.

Rust out or wear out 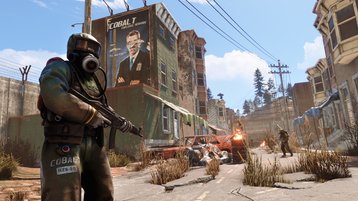 "Our website is currently unavailable due to the fire that occurred last night in the OVH data center in Strasbourg," said the website at Centre Pompidou, a major Paris landmark that houses the French National Museum of Modern Art. "We want to express our support to the OVH team, and will keep you updated."

Users playing Rust, a survival game set in a post-apocalyptic world, were less philosophical than the culturati of Paris, at the news that 25 servers had been permanently lost: "We better get something in return for all of the people that grind this week off for their bases and SH*T!" said one Rust player. "Get on with it and compensate people."

"25 of the sandbox survival game's European servers have been destroyed by a fire at a data center, and developers Facepunch Studios say they will not be able to restore the lost data," reported Alice O'Conner on Rock Paper Shotgun. She confirmed that all the data on those servers will be lost, before mentioning that she herself had lost "the coolest base ever built in Rust, as well as secret items you're not even supposed to be able to get".

Chess players took it in their stride when servers belong to the free Lichess service were lost. "Several of the Lichess servers burnt down in a datacenter fire tonight," the service tweeted. "No-one was harmed. Thanks to our zealous sysadmin and his backups, all we lost was 24h of puzzle history."

The African Internet service provider AFR-IX is still offline, and the site for disk encryption utility Vera Crypt remains offline 12 hours after the fire was out

Other victims of the fire, mentioned in an article at BleepingComputer include the Deribit cryptocurrency exchange site which lost a blog that is still offline as we speak.

Some specialist sites including the Fursuitarchive, and animation site Catsuka have been affected. "Due to a fire in my datacenter, Catsuka is gone. I'll keep you informed when I'll resurrect my website," posted Catsuka's owner.

Costin Raiu, director of the Global Research and Analysis Team at Kaspersky pointed out what might be seen as a silver lining. Some of the activities hosted in any cloud provider are not entirely beneficial, and some malware operators were using the service: "Out of the 140 known C2 [command and control] servers we are tracking at OVH that are used by APT and sophisticated crime groups, approximately 64% are still online. The affected 36% include several APTs: Charming Kitten, APT39, Bahamut and OceanLotus."

Update: An early version of this article reported that Bad Packets had lost data in the incident. The company has told DCD that its comment "Some data may be lost", was a tongue-in-cheek comment.