First four tests out of 37 completed - in space

After Microsoft and HPE sent a computer to the International Space Station this February, the two companies have said that they have completed their first set of workloads on the Spaceborne Computer-2.

As the name suggests, the system is a sequel to the original Spaceborne Computer. It was sent to the ISS in August 2017, coming down aboard a SpaceX Dragon capsule some 615 days later.

That time, the project just involved HPE and the ISS. With the sequel, the group looped in Microsoft to store and further process data on Azure. 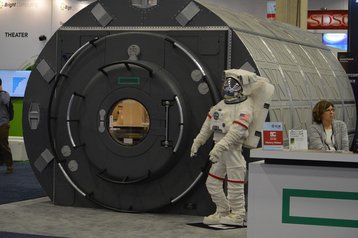 The project aimed to test using the SC2 for Edge processing, and cloud for further work. They settled on sequencing human genomes - a useful study to see if the astronauts exposed to increased radiation have any mutations that would make future trips to somewhere like Mars a bad idea.

The problem is that sequencing a single 6 billion character human genome generates about 200 gigabytes of raw data, and the Spaceborne Computer-2 is only allotted two hours of communication bandwidth a week for transmitting data to Earth - with a maximum download speed of 250 kilobytes per second. That would mean it would take two years to transmit one genomic dataset.

“It’s like being back on a dial-up modem in the ‘90s,” said David Weinstein, a principal software engineering manager for Microsoft’s Azure Space division.

So, instead of sending the full thing down, SC2 looks for anomalies and then only sends those down to Earth (and into an Azure data center).

HPE said that it had completed four such experiments, was working on another four, and had 29 more yet to do.