Part of a multi-phase development called Shugart Farms, the facility will be located in South Fulton County.

The planning and construction of the facility will be undertaken by Red Rock Developments, in collaboration with an affiliate of a US investment fund called Starwood Capital.

The fact that Microsoft was behind the data center project recently emerged, after it was revealed that the plans would receive more than $14m in tax relief over the next ten years, as well as a $420m bond resolution.

According to the Atlanta Business Chronicle, Microsoft has plans for another 250,000 square meter facility in Fulton County, but has yet to secure a site for it. 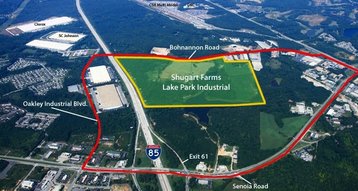 Though its ambitions are rather zealous, it is unsurprising that the cloud computing giant is looking to expand its capacity in Atlanta’s metropolitan area, as the area is increasingly sought out by data center developers due to a combination of cheap land, low power costs and aggressive use of tax incentives.

Other firms seizing on the opportunities the market has to offer include Facebook, which is in the process of expanding its Newton County campus to more than 2.5m square feet (232,260 square meters); Google, which is building on its Douglas County campus, nicknamed "Woodside," to reach a million square feet (92,900 square meters); and retail colocation provider Switch, who is also building “The Keep,” a $2.5bn, million square foot campus in Douglas County.

The move also makes sense from a business perspective for Microsoft, whose “Intelligent Cloud” department (which includes Azure) became its largest revenue generator last year, as it has successfully increased its income from enterprise cloud adoption.