Maincubes has laid the foundation stone for a new data center outside Frankfurt, Germany.

The company recently announced the laying of the foundation stone for the new FRA02 in Schwalbach near Frankfurt. 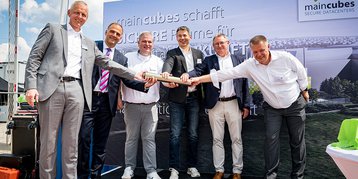 The company announced plans for its second Frankfurt facility, FRA02, in July 2021. Though some groundworks began last year, the laying of the foundation stone was delayed due to Covid-19.

"Planning a data center architecturally and, above all, technically, obtaining the permits, building it and aligning it to the specific requirements of the user - this is a complex matter, but it runs really smoothly and constructively here," said Oliver Menzel, CEO of maincubes. "We have found a very good location for our FRA02, many thanks for the constructive cooperation to the Schwalbach City Council and Mayor Immisch. Many thanks to ICT Facilities for the planning, Zech Bau for the implementation, and ROM for the building technology.”

The German state’s federal IT service ITZBund is due to be an anchor tenant of the facility, with maincubes saying FRA2 will be built to the agency’s sustainability and climate protection standards.

Different waste heat concepts are reportedly being planned: "Our aim is to achieve the best possible in terms of sustainability and at the same time maximum security for our data centers,” said Albrecht Kraas, CTO at maincubes.

Alexander Immisch, Mayor of the city of Schwalbach added: "We welcome maincubes with its data center to the business location Schwalbach am Taunus! I am very pleased that maincubes, as a data center operator, considers the ecological factor to be so important and takes it into account. It is our great pleasure that the main user of the building is a federal institution and that the Federal Information Technology Center (ITZBund) will soon be moving in.”

Part of German construction conglomerate Zech Group, Maincubes currently operates the FRA01 data center in Frankfurt, and another in Amsterdam in the Netherlands. In 2015, Keppel DC REIT acquired a then yet-to-be constructed Maincubes data center in Offenbach, outside Frankfurt.

Earlier this year the company announced plans for a third facility in Frankfurt and its first in Berlin.