Usually we put puns here, but I didn't want to milk it

Outages are often caused by simple things like power failures, someone pulling the wrong cable, or adverse weather effects.

Sometimes, however, they are caused by cows. In a series of tweets about trouble on the Oregon trail, Google's senior vice president of technical infrastructure, Urs Hölzle, explained a rather unusual incident.

Eat beef, save the Internet

"Ok, here's a new one: did you know that cows can cause network outages? Don't laugh, it happened to us," Google's eighth employee wrote, describing the bovine bother.

"Recently, we noticed frequent short outages ("flaps") on a multi-terabit fiber path through Oregon. This link is an aerial fiber link (fiber is strung along the path of a high-voltage power line). Such links have lower reliability because storms, trees, ice, and the occasional hunter can damage them. But this time we found something new: the fiber line had fallen to the ground yet continued to work just fine. But recently a farmer had started grazing a herd of cows nearby. And whenever they stepped on the fiber link, they bent it enough to cause a blip." 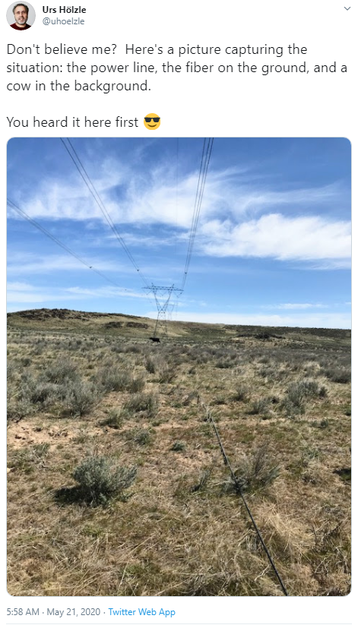 Hölzle then provided a picture of the power line, the fiber on the ground, and a cow in the background.

While this specific case is rather rare, animals are actually responsible for a number of outages. Hundreds of power cuts are attributable to unlucky squirrels, snakes, and other critters that accidentally short circuit equipment. One time, cats filled a data center with hair and poop.

Google was previously vulnerable to a different kind of animal: Shark attacks. Back in 2014, it had to send divers to reinforce thousands of miles of submarine cables as sharks appeared to have quite the appetite for the thin cables.

Nowadays, most submarine cables are reinforced and insulated to reduce this risk.

More benignly, Google's South Carolina data center has a resident alligator, which moved into a lake used for evaporative cooling, which is slightly warmed by the presence of the data center. This beast is not a threat, and may contribute to the site's physical security.

But the most unusual and unlikely meeting of the natural world and our caves of steel was perhaps the time a deer broke into a data center. Luckily, the facility was being decommissioned, and the bewildered creature managed to escape unharmed.

What's the most unlikely animal incident you've seen impact network connectivity? Let us know in the comments below.