You can’t protect infrastructure from sharp teeth and long claws

Data center owners are obsessed with reliability and go to great lengths to ensure uninterruptible operation. They deploy spare generators, store thousands of liters of fuel and install redundant cooling systems that waste away most of their life just waiting for disaster to strike. There are additional networks that will kick in if the primary connection fails, and offsite locations to store backup data. But data center owners can’t do a single thing about squirrels.

Every year, squirrels, and other small animals, carry out hundreds of attacks against the electrical grid. They chew through cables, climb into transformer boxes and store their nuts in the power distribution panel. Some cyber security professionals joke about rodents as the ultimate adversaries, responsible for more damage than any nation state. 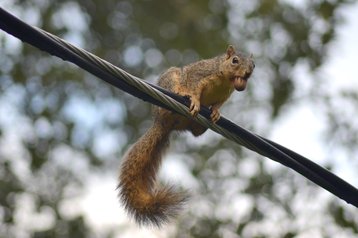 Cyber Squirrel 1 – a website created by Cris ‘Space Rogue’ Thomas – has been tracking the number of power outages attributable to these little critters. Since the project began in 2013, Thomas managed to collect data on 879 faults caused by squirrels, 434 outages triggered by birds and 83 instances of snake electrocution.

In frequency of attacks, snakes were followed by raccoons, rats, martens and beavers. Jellyfish were implicated in 12 outages – although they mostly attack the water supply of power plants, not the grid itself.

Thomas created the website as a response to the doomsday preachers of the security world, who have long warned about cyber attacks against national critical infrastructure. We’ve all heard about Stuxnet and power outages in Ukraine in 2015, the work of Russian hackers, right?

It turns out that since 2013, there were just three attacks against physical infrastructure that could be directly attributed to human actors. Meanwhile animals were responsible for several thousand such attacks.

The project teaches us to trust evidence, and not give into the hype. It also serves as a reminder that, while working at the cutting edge of technology, we are still very much at the mercy of nature.