Gary Cohn fell out with Trump over tariffs. Previously he was COO of Goldman Sachs

Cohn will work on business initiatives and external engagement, in areas including business development, client services, public advocacy and client relationship management, according to IBM's press release. He was director of President Trump's National Executive Council from January 2017 until March 2018, when he split with the president over policy matters. Previously, as president and COO at Goldman Sachs, he testified to Congress defending the bank's role in the financial crisis of 2007 to 2008.

He's also on the board of advisors for biometric blockchain startup Hoyos Integrity, which hopes to launch a next-generation secure mobile phone for governments and corporations. He also chairs the board at national security firm Pallas Advisors, alongside other tech investment activities through Cohn Robbins Holding (CRHC). 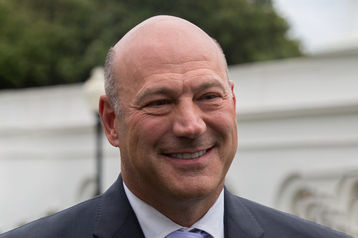 "Gary is a globally respected leader with deep experience operating at the center of business and government," said a statement from IBM CEO Arvind Krishna. "As a senior representative of IBM, his knowledge of technology and business transformation, combined with policymaking expertise, will bring unique value to our clients and stakeholders as we accelerate our hybrid cloud and AI strategy."

IBM has had a rough 2020. Krishna was appointed CEO from IBM's cloud division at the start of 2020 with a brief to refocus the company on the cloud. Although the pandemic caused a surge in data centers and the cloud during 2020, the company's continued reliance on services saw its revenue drop by 46 percent, as customers delayed spending on projects. In October, Krishna announced that the services business would be split off as a separate company, something like $19 billion in size, by the end of 2021, leaving IBM focusing on the cloud - but keeping its remaining hardware business.

As the President's chief economic advisor, Mr. Cohn steered the Tax Cuts and Jobs Act of 2017, but was seen as a representative of Wall Street, and labeled by other White House factions as "Globalist Gary". Out of step with the then-influential populist Steve Bannon, Cohn resigned in March 2018, when President Trump imposed tariffs on steel and aluminum.

Previously, he was president and COO of Goldman Sachs, from 2006 to 2016, a period which included the financial crisis of 2007 to 2008. Commenting on that period, writer Matt Taibbi famously commented in Rolling Stone magazine in 2010: "The world’s most powerful investment bank is a great vampire squid wrapped around the face of humanity, relentlessly jamming its blood funnel into anything that smells like money."

In 2010, Cohn testified to Congress: "During the two years of the financial crisis, Goldman Sachs lost $1.2 billion in its residential mortgage-related business. We did not 'bet against our clients', and the numbers underscore this fact."

His time at Goldman Sachs also coincided with the 1Malaysia Development Berhad (1MDB) sovereign fund corruption scandal. in October 2020, Goldman agreed to pay penalties of $2.9 billion, $174 million of which would be clawed back from executive compensation. Reuters reports that he has made a charitable donation instead of paying money back to Goldman.