General Keith Alexander has joined Amazon's board of directors.

Alexander was the head of the National Security Agency when whistleblower Edward Snowden revealed the agency's widespread illegal wiretapping and data collection programs, many of which relied on intercepting data from US tech corporations.

The high-ranking appointment of the former commander of the US Cyber Command comes as Amazon Web Services continues to dispute the Department of Defense's award of a $10 billion military cloud contract to rival Microsoft. In its court filings, Amazon claims political interference by the President of the United States. 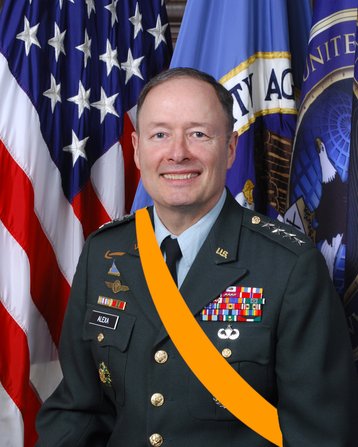 In 2001, Alexander was head of Army Intelligence and Security Command. After the tragic attack on September 11, he ordered the 10,700 spies and eavesdroppers under his command to begin monitoring the phone calls and email of US citizens who had no connection to terrorism, as well as calls between journalists and their spouses, Wired reports. Although this action was illegal, Congress retroactively gave immunity to the telecoms companies that helped.

Two years later, he was named deputy chief of staff for intelligence, where he wrote a memorandum to the president codifying the interrogation of non-combatants.

Next came his appointment at the NSA in 2005, where he first pioneered the 'Real Time Regional Gateway' in Iraq that aimed to collect every citizens' electronic data for later analysis.

He then built upon that, creating a global mass-surveillance network that grew to include tapping the networks of Google, Microsoft, Yahoo, and Facebook (but not, as far as we know, Amazon), as well as all major submarine cable landing stations. The companies claim they were not aware of the illegal surveillance carried out on their systems.

At the time, he misled the House Intelligence Committee when asked whether his agency was involved in warrantless wiretapping.

In June 2013 came the Snowden leaks, first detailing the collection of 120 million Verizon user phone records, followed by the PRISM program (email, voice, text, video of non-US and US citizens using tech giants). Further leaks focused on spying on EU and UN diplomatic headquarters, the hacking of Chinese companies and universities, and a successful effort to compromise the Asian fiber-optic network operator Pacnet.

The full scale of the various programs is still being uncovered, with UPSTREAM targeting submarine cables, XKeyscore analyzing global Internet data, and MUSCULAR managing to break into the main communications links that connect Yahoo and Google data centers around the world - to name but a few.

Many of the programs were done in conjunction with the UK's GCHQ, Germany's BND, and other members of Five Eyes.

Alexander retired the next year, and quickly founded IronNet Cybersecurity to provide cybersecurity protection to private-sector companies - it has since raised more than $100m.

While this was all happening, Amazon has grown from a small online book retailer to a goliath straddling shopping, cloud computing, and surveillance technology. Amazon Web Services accounts for a sizeable chunk of the world's Internet, as its largest cloud provider - and counts the CIA, DARPA, and much of the US Intelligence apparatus among its customers. Its Rekognition service provides facial recognition tech to federal agencies.

Its Echo devices also offer microphones to consumers that they install in their homes.

This month, seven years after Snowden's revelations, an appeals court found the program was unlawful.