Unico Properties is looking to convert a former CenturyLink data center in Salt Lake City, Utah, into a mixed housing and retail development. 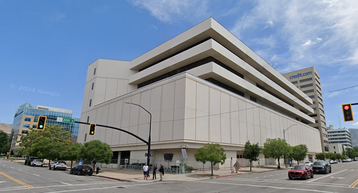 The six-story building was constructed in 1980. It was previously a US West, Inc. data center and subsequently a Qwest facility after the companies merged in 2000, and finally a CenturyLink facility after it merged with Qwest in 2011. CenturyLink is now known as Lumen but exited the facility at some point over the last few years.

“Initially, when you look at the building you think, ‘50,000-square-foot plate doesn’t scream multifamily at first blush,’” said Ned Carner, chief investment officer with Unico Properties. “We’re excited about it because you have this ability to create super unique units.”

Because of the existing layout of the building, which includes ceilings as tall as 19 feet, about half of the new units would be two stories. The ceiling heights in the other half are 17 feet.

“You kind of think about gutting the building down to a concrete shell and just rebuilding it,” Carner said. “We’re going to have a very, very well amenitized building. This is converting a vacant, fully functional, obsolete data center that we acquired for almost nothing.”

On top of that existing building is room for an acre of amenities. Renderings show a pool on the west side of the building, about half way up. Units above the third floor will have spacious patios, said Gina Pfingston, a manager of investments and development at Unico.

“Those units have these patios that are so large they kind of feel like backyards,” Pfingston said. “We’ll have some turf and pavers. It’s going to have a kind of condo home feel to it.”

Unico also plans to build an eight-story apartment building on the site of the site’s surface parking lot.

Unico bought the two-acre property in 2017 and has been proposing redevelopment to residential units since 2019. It was originally planned for a new building with much more parking space and less ground-floor retail.

The company hopes to win city approval and permitting over the next year and break ground by early 2024. Construction is expected to last for two years.

However, old data center sites usually find second lives for more industrial uses. In Richmond, Virginia, a former Digital Realty data center has been converted into an indoor farm. In New York, a former Speedcast data center was acquired last year by a Blackstone-backed logistics firm, which planned to tear it down and redevelop it as a distribution center. A former banking data center in Stafford in the UK is also being torn down so a warehouse can be developed.

In London, Colt is demolishing an old data center to make way for a new data center.