Phase 1 of new HPE-Cray machine delivered, will be Australia’s most powerful system when fully operational

The first phase of the Setonix supercomputer has been installed at the Pawsey Supercomputing Centre in Perth, Australia.

Stage 1 of the new $48 million HPE Cray EX supercomputer – named after the scientific name for Australian marsupial the quokka – has been installed next to the Centre's existing Magnus and Galaxy HPC systems. 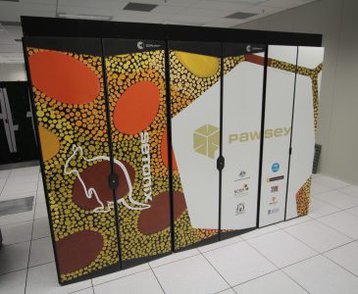 Stage 1 delivery of Setonix will increase the computing power of the Centre by 45 percent by itself. When fully operational, Setonix promises a potential peak of 50 petaflops and will be up to 30 times more powerful than Pawsey’s existing two systems combined.

“Setonix marks a step-change in Pawsey’s supercomputing firepower, and this additional capacity will allow more researchers and industries to access next-generation computing speed and data analysis.”

Stage 1 will see a team of early adopter researchers run code to test Setonix before it becomes available for allocations early in next year. Stage 2 will be delivered by mid-2022 and will be operational in the second half of the year.

Setonix will include an eight-cabinet HPE Cray EX system, including more than 200,000 AMD compute cores across 1600 nodes, more than 750 AMD GPUs.

The system will have more than 548 TB of CPU and GPU RAM, connected by HPE’s Slingshot interconnect. It will deliver at least 200Gb/sec of bandwidth into every compute node, and 800Gb/sec into the GPU nodes, as well as interoperability with the Pawsey Centre ethernet networks.

“Setonix will process vast amounts of radio telescope data from SKA-related projects, and many other projects of national and international significance that we are proud to support,” added Stickells.

Setonix is adorned with artwork produced by Wajarri Yamatji visual artist Margaret Whitehurst and inspired by the stars over Wajarri country in Western Australia. The Wajarri people are the traditional owners of CSIRO’s Murchison Radio-astronomy Observatory in Western Australia where one part of the world’s largest radio astronomy observatory, the Square Kilometre Array, will be built.

The world's largest radio telescope, the Square Kilometre Array, is being built across Australia and South Africa. Once live in around 2027, the array will be the world’s largest public science data project.

To handle the 5Tbps of data that will come out of the SKA, two supercomputers are being built in Cape Town and Perth, known collectively as the Science Data Processor (SDP). Together, the systems will be capable of 250 petaflops of performance. Precursor telescopes MWA and ASKAP will use a 546 teraflops supercomputer at Pawsey.