Eco-Caverne, designed by Swiss-based underground construction startup Eccus, is based on new underground space excavated 30m under existing terrain. APL says these underground facilities can be build up to 20 percent cheaper than building above-ground, and have benefits including providing waste heat to warm nearby buildings. 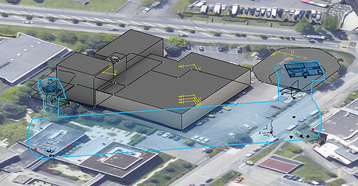 Numerous data centers have been built in underground caverns, claiming advantages in cooling and resilience. Data center equipment has been installed in Lefdal Mine in Norway, while Bluebird in Springfield Missouri is expanding in an abandoned limestone excavation, and LightEdge's Cavern Technologies in Kansas has a limestone cave. Other data centers have been built in abandoned bunkers, including Bahnhof's Pionen, and EWL in Switzerland.

Eccus intends to take these advantages to urban areas, adding further benefit: the Eco-Caverne will be easy to access, and create available space in completely built-up areas.

The Eco-Caverne is a waterproof cylinder 30m underground, up to 150m long. The chambers will be built in one of three standard diameters; "Vega" approximately 10m, "Rigel" approximately 13m, and "Hadar" around 15m. Each chamber will be provided with a 3m x 6.5m lift with a capacity of 12 tonnes at one end, and an emergency exit at the other.

The chambers will also have ventilation, security systems, and a fire detection and prevention system.

Eccus says it can build underground, using the same techniques as underground road and railway tunnels, and deliver secure underground space quickly compared with building above ground, and with other benefits. The Eco-Cavernes can be built under existing buildings, and provide space where land is otherwise unavailable.

APL is applying this idea to data centers, which it plans to offer in France and Switzerland: "This new solution makes it possible for a company to create or complete its computer hosting area on land that has already been built or in a saturated zone," says APL's announcement.

The data center builder is making much of the heat advantages, proposing the facilities' waste heat can be used directly to warm buildings above. APL says a 2,000 sqm (21,500 sq ft) data center can supply 22GWh of heat energy per year, enough for 2,000 homes.

The facilities can also be run without day-to-day staff, allowing the operator to reduce oxygen levels to 13 percent, cutting fire risks.

When the cost of land is factored in Eccus says its underground tubes could cost 10 percent or 20 percent less than building above ground - and does not spoil the environment with further buildings.

Eccus was founded in 2020, after Andrew Bourge, an engineer with 30 years of experience in tunneling, heard of a data center project in Zurich: "The land surface required was huge and it created very few job opportunities," says Bourge. "Land scarcity is not only driving up prices, but there is a greater understanding among the general public that land cannot be wasted."

The company aims to provide an underground alternative priced on par with a surface solution. As well as data centers, the idea is aimed at the energy, pharmaceutical, manufacturing, and logistics industries, mainly offering storage facilities rather than human-occupied spaces.

The caverns have three criteria, says Bourget: “It should not be visible from ground level; it shouldn’t have any building constraints as it won’t change the characteristics of the site above the ground; and it should be cost and energy efficient to run.”

“This partnership is based on the complementarity of our expertise and the development of synergies between our two industries. With the Eco-Caverne we wanted to provide our partners with a solution that combines economic constraints, environmental imperatives, and energy performance,” said Christophe Weiss, Managing Director of APL Data Center.