How Bluebird Network got a data center - and how it expanded

What makes someone look at a mine and see an ideal spot for a data center? In the case of Bluebird Network’s underground facility in Springfield Missouri, the story goes back at least 20 years. Bluebird’s general manager Todd Murren told us the history.

In 1946, the Griesemer Stone Company began mining limestone from beneath the city of Springfield. The “room and pillar” method left huge empty underground halls. By the 1960s, Griesemer was offering warehouse space in these vast caverns.

In the 1980s, the city of Springfield got its own telecoms firm, SpringNet, when the community-owned utility decided to roll out broadband. At SpringNet, Murren began looking at the idea of setting up a secure data center in the 1990s, and eventually realized the ideal site was 85 feet below him, in Griesemer's combined mine-and-warehouse, now renamed Springfield Underground.

This feature first appeared in the 2020 modernization supplement. Read it for free today. 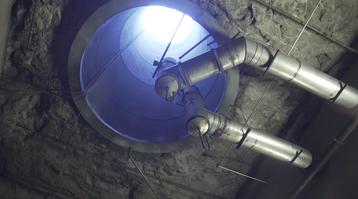 “You can’t find anywhere else with the same level of protection,” he told DCD. “Some people look at the mine and feel scared or think it’s a bit ominous, but human beings have been looking to caves for protection since the beginning. We wanted something that would be safe from dangers that most data centers faced.”

Missouri is prone to tornados, and a data center underground is one way to stay safe, but moving to a once-working mine brings other concerns. “When you’re underground in a mine you may want to check that you’re not building next to a TNT factory. We set up a seismograph back before we even built the data center because we’re dealing with hard drives and the last thing you want to do is shake them.

“But we found no problems. I’ve been there when they detonated explosives in the mine, there’s nothing quite like it,” he said. “Of course, I was a safe distance away.” Limestone is structured like a rocky sponge, he explained. It can absorb shock and is flexible enough to dissipate energy.

SpringNet bought space in the mine, and soon began construction - with some of the work already done for them: “The walls, floor, and roof are already built for you.” The low ambient temperatures reduced the cooling bill, and expansion was never an issue as there’s almost unlimited space to expand into.

Originally, the data center was only going to be partially in the mine, with auxiliary systems such as generators kept above ground. But then 9/11 happened.

“It caused us to pause and rethink some of the design features. The mine offers some very reliable natural disaster reinforcements, but unnatural events caused us to rethink them. That pretty much brought the project to a halt.”

Suddenly, SpringNet became very aware of the damage a plane could do. The redesign brought all of the data center’s surface assets, generators, and mechanical cooling systems underground. “Cooling and power,” Murren said. “They’re much like our critical organs in the human body. Our heart and lungs are protected under our ribcage. So, our redesign after September 11 brought those elements underground.”

With the rethink, work began in earnest to get the system ready for a launch in 2003.

“It took about three years,” Murren said. “Three years to properly prepare the place, smooth out the walls, and install ventilation and the electrical equipment. We had to come up with a whole design philosophy and kept on making changes because of the challenges we faced.”

Before Murren and his team ever moved in, the company that operated the mine was contracted to prepare the space. Once enough room had been made, level floors were laid with concrete.

Of course, the underground roads into the facility weren’t exactly smooth, so most of the heavy equipment brought into the mine had to be dismantled or shipped in on special trucks equipped with suspension controls, and specialists who knew how to navigate tight spaces were brought in to help.

“We had to remove two old generators and bring in three new ones. As with most generators, these things are brought to the job site on a semi-truck. In normal circumstances, a crane could be used, but when you are in a mine, with only 25 feet of space to the ceiling, you can’t use a 100-foot crane. Getting that generator off a truck and getting it into place was a challenge,” Murren added. “We had to do a certain amount of dismantling.”

Another problem was the fuel for the backup generators, a potential fire hazard in the enclosed space: “When we started, we had to store around 3,000 gallons of fuel and now we’re storing around 12,000. When you bring those underground in a mine right next to critical operations, you’ve brought a risk that you normally don’t have in a [surface] data center.” 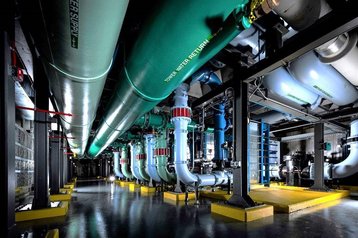 Moving from above ground to below ground

Generators also have to breathe: when they’re turned on, gases such as carbon monoxide and carbon dioxide are released. The mine is essentially an enclosed environment, so those generators needed sufficient ventilation.

By 2014, SpringNet had a thriving underground business, with 84 tenants including regional healthcare providers, but the telco wanted to invest in fiber, so it sold the data center to local telecom provider Bluebird Network.

Mining ceased in 2015, just one year after Bluebird took over, and the new owners embarked on an upgrade process, backed by tax incentives from the State - Murren stayed on.

If any more space is needed, it’s no problem as the mine still has some five million square feet of tunnels and caverns.

The expansion meant increasing the number of UPS systems, cooling systems, and generators. This last addition meant something more had to be done with the exhaust. Poisoning the workforce was not part of the plan.

“Part of the work on the mine was addressing the exhaust and getting rid of it. The first thing we do is scrub it, getting it as clean as we can, and then get it out of the mine.” Until the expansion, the underground complex's regular ventilation systems could do the job, but for the expansion, Bluebird drilled a hole, 65 feet deep and 13-feet-wide, to act as a chimney for exhaust gases and hot air from the chillers.

During intense lightning storms, something Missouri faces quite often, electrical spikes were discovered. These ‘anomalies,' as Murren calls them, led to the realization that the data center’s grounding system wasn’t good enough.

“So, since buildings up on the surface get to ground themselves by digging down; what do you think you can do when you’re underground?”

The team decided it would be best to dig 340 feet down into Springfield’s water table. It may sound strange, but limestone is an insulator and the company needed to find a good conductor to dissipate the voltage.

“So, we grounded ourselves to the water table. There are many wonderful properties to stone, one being you can’t electrify it, but the issue is you want something conductible when you want to ground electricity.”

Modernization can be a challenge to any building, but underground it’s a major challenge. Bluebird Underground is Murren’s pride and joy and he’s proud to have seen it through all these stages.

“It’s a blessing in disguise. Because now, anything can be going on, above, and has zero impact on the resiliency of this data center."