It's nuke-proof, tsunami-proof and cooled using renewable energy, what's not to like? 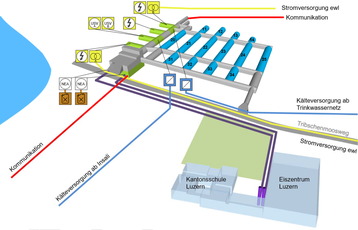 Plans for the facility – EWL

Once completed, EWL’s underground data center will house around 530 racks and be cooled by water from the nearby Lake Lucerne. Waste heat from the facility will also be used to heat nearby homes.

In 1601, the towns surrounding Lake Lucerne were decimated when a landslide fell into the lake, causing a four-meter-high tsunami. EWL say that the underground bunker could withstand such a wave, according to their projections.

The bunker was built in the 1960s following a Swiss federal law that was implemented to try and create enough nuclear fallout shelters to house the entire population of the country.

The Lucerne shelter is a seven-story deep cavern between two motorway tunnels that at one point contained a command post, an emergency hospital, a radio studio, a telephone center, prison cells and ventilation machines. The shelter was designed to withstand the blast from a one megaton nuclear explosion from one kilometer away.

Around the same time that this bunker was being built, the US government invested billions into underground bunkers and missile silos in preparation for all out war with the Soviet Union. After the threat of nuclear receded, these sites have found new life as data centers amid fresh security concerns.

These hangovers from the Cold War are dotted all around the globe, European cloud and colocation specialist DEAC operate a data center out of a disused Soviet nuclear bunker in Latvia. The company announced yesterday that it is looking for a co-owner/long-term partner for a new data center being built in Riga, Latvia.