Microsoft will invest $2bn in self-driving car company Cruise, entering into a partnership that will see it offer cloud and Edge support.

Cruise was acquired by GM back in 2016, but is operated as a somewhat independent company. It is still able to raise outside investment, and previously took $2.25 billion from SoftBank's Vision Fund, $750m from Honda, and further investments from GM. The company is valued at $30bn.

The exact nature of the Cruise, GM, and Microsoft partnership has not been detailed, but will see the companies working together to combine their "software and hardware engineering excellence, cloud computing capabilities, manufacturing know-how and partner ecosystem."

The deal does not mean that Cruise will exclusively use Azure, but it will be their primary and preferred cloud provider. Cruise job listings only mention Amazon Web Services and Google Cloud, so this may be an entirely new customer win for Azure.

"As Cruise and GM’s preferred cloud, we will apply the power of Azure to help them scale and make autonomous transportation mainstream," Satya Nadella, CEO, Microsoft. 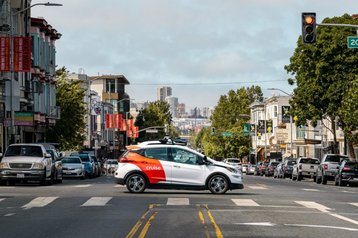 Autonomous vehicle development requires a huge amount of compute power. To train the driving systems, companies simulate different driving scenarios in virtual worlds again and again - in 2020, Cruise said its systems drove for 200,000 hours a day in simulation on its Hydra platform.

"Simulation is an incredibly important function at Cruise, accelerating our autonomous vehicle development, testing, and deployment through specialized frameworks and tools," one job listing states.

"The Simulation and Test Infrastructure team owns the platforms that facilitate the scheduling, execution, and data flow of autonomous vehicle simulation and testing at an extremely high scale."

Self-driving competitor, and assumed market leader, Waymo also uses huge server farms to crunch simulated rides. For every 22 years of driver experience Cruise's systems clock, Waymo does 100 (of course, with different simulations that each will argue is better). As an Alphabet company, its 'Carcraft' platform is hosted on Google's servers - although as we saw with Alphabet's Verily jumping to Azure, that's not guaranteed.

Once the autonomous vehicles hit the road, they will need to bring compute power with them. Each vehicle will need powerful sensors and even more powerful computers to rapidly process the information, understanding its environment, and avoiding crashes.

The cars will also need to communicate with each other, ideally helping optimize traffic and warn of upcoming issues. How exactly this will work is not clear. Early proponents of autonomous vehicles insisted that everything an autonomous system will need will be on the vehicle itself, with driving data uploaded occasionally for training at a later date.

But last August, Alphabet admitted that building vehicles for the world and streets of today is "harder than we thought." They spun up yet another company, Cavnue, which seeks to build a road in Michigan to try out another idea: Making the road smarter.

Cavnue expects to build Edge compute and sensors into the road, offloading some of the work from the vehicles themselves. Among the members of the company's advisory committee is GM.