The China High Performance D³ facility will be used for the development of highly (Level 3) and fully (Level 4) automated self-driving vehicles. 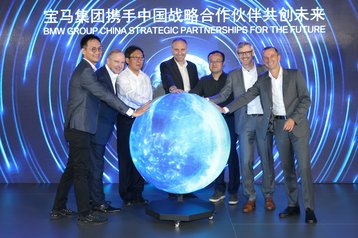 “Our ultimate goal is to make the car safer than the human driver through greater automation," BMW's SVP of automated driving, Alejandro Vukotich, said.

"Safety is paramount to us. We therefore need to process a lot of data for simulation, testing and validation. The launch of the D³ - Data-Driven Development – platform in China is the next big step for us along this path.”

Tencent will provide IT architecture, tools and 'platforms' for the facility, the companies said. “Tencent is committed to assisting automotive companies in the digital transformation,” Dowson Tong, president of Tencent Cloud & smart industry, added.

“The collaboration between Tencent and BMW Group has deepened over the past year or so, which proves BMW’s recognition of Tencent’s technical strength in the fields of cloud computing, big data, security and AI. We hope that with the continuous deepening of cooperation between the two parties, we can create a new model and a new benchmark for cooperation between Chinese technology companies and international automotive companies.

"We also look forward to providing more assistance to the localization of international first-class automotive companies in China.”

Specific details of the data center were not given, but BMW already operates a similar D³ facility near Munich. That site boasts 230 petabytes of storage capacity, more than 100,000 cores and more than 200 GPUs.

The announcement of a Chinese autonomous car data center comes a day after the company said that production chief Oliver Zipse will succeed Harald Krüger as its next CEO this August, with an aim to reverse declining profits amid trade wars, a shift to electric vehicles, new approaches to mobility, and the rise of self-driving technology.

Chairman Norbert Reithofer said: “He will provide the BMW Group with fresh momentum in shaping the mobility of the future.”

A former BMW board member told The New York Times: "Production expertise is important, but if you want to avoid ending up being a hardware provider for Google or Apple, you need to have the ability to move up the food chain into data and software."

BMW's new partner, Tencent, lags behind some of it rivals in the Middle Kingdom. Baidu, in particular, has driven the most of any Chinese self-driving car company, logging 140,000 kilometers in Beijing in 2018 alone.

With more than 135 partners - including BMW - the company hopes to build the “Android of the autonomous driving industry,” with a somewhat open platform known as Apollo.

Tencent has made some efforts to catch up, in 2017 acquiring five percent of Tesla for $1.78bn and announcing a partnership with Guangzhou Automobile Group to develop Internet-connected 'smart cars.' Last year, it opened a self-driving research facility in Silicon Valley.