The FBI and DOJ are assisting with the investigation

After a noose was found at a Facebook construction site, two construction trade groups are offering a $100,000 reward for information leading to an arrest in the case.

The Federal Bureau of Investigation and Department of Justice are also assisting the Altoona Police Department with the investigation. Two days after the incident, a racist song was played at a nearby Microsoft data center construction site. 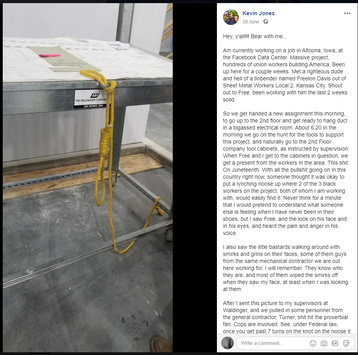 “We believe in America, and no one should experience fear, workplace intimidation, or be subjected to hateful symbols of racism,” Earl Agan, Central Iowa Building & Construction Trades president, said

"We stand united against racism and discrimination and are committed to ensuring our members feel safe on the job.”

The trade union is partnering with North America’s Building Trades Unions to offer the reward, which is set to expire on September 1.

Altoona Police Department Public Information Officer Alyssa Wilson said that interviews were still being conducted and, as of Thursday, all information in the case will be filtered through the FBI's Omaha office.

It is not clear if there is a direct link between the noose incident and what happened at the Microsoft site, both of which are Iowa data center projects under development by Turner Construction.

"We are working vigorously to ensure the perpetrators of these hateful acts face the consequences of their actions," a Turner spokesperson told DCD. Facebook and Microsoft spokespeople also denounced their respective incidents.

"It is extremely disheartening to see that even in our own data center industry we are seeing acts of racism and hatred on our job sites," Microsoft's GM of global data center execution, Douglas Mouton, said this week at DCD's virtual Building at Scale event.

"This is impacting everyone and it's a call to action for us to think how we as leaders take this head-on."