Calcul Québec has launched a new 5.9 petaflops supercomputer for scientific researchers in Canada.

Narval is a Dell-EMC PowerEdge system equipped with 80,000 CPU cores utilizing AMD Epyc Milan processors, 422 TB of memory and 25 PB of disk storage, as well as 632 A100 graphics processing units (GPUs) from Nvidia. 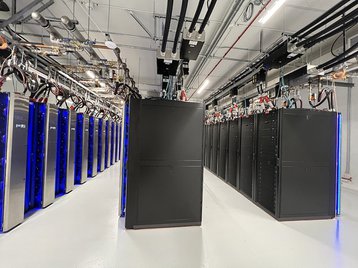 Founded in 2011 Calcul Québec (CQ) is a group dedicated to sharing high-performance computing infrastructure in Québec for research and a regional partner of Compute Canada, a non-profit organization that works to coordinate and facilitate the delivery of Canada’s national advanced research computing (ARC) platform.

“This is always a very exciting moment for our team because we know that Narval will have a positive and direct impact on Canada’s research ecosystem and on our society,” said Suzanne Talon, CEO of Calcul Québec.

Narval is housed alongside the CQ's existing Béluga supercomputer at the École de technologie supérieure in Montreal. The system is named after a narwhal observed in the St. Lawrence Estuary in the company of a group of belugas.

With a Linpack performance of 5.9 petaflops and a theoretical peak of 12.1 petaflops, Narval ranked 83rd in the most recent Top500 list and 21st in the Green500. It is reportedly the most powerful system dedicated entirely to scientific research in the country.

Pierre Fitzgibbon, Minister of the Economy and Innovation and Minister responsible for Regional Economic Development, added: “With the availability of Narval, Calcul Québec is helping to make Québec a leading scientific center for research, training, technology transfer, and the creation of value-added products. This supercomputer will encourage the realization of new research projects, generating major spin-offs in strategic sectors of Quebec’s economy.”

Calcul Québec launched the 2.3 petaflops Béluga HPC system in 2019. That system launched at 106th place in the Top500 before slipping to 288th in the most recently-published list.