Amazon is in discussion with the nation of Chile to host and mine the huge amounts of data generated by the country’s massive telescopes, Reuters reports.

The company, which this week reached a trillion dollars in valuation, has been talking with the Chilean government for the last two years about the possibility of a new data center for local firms and government services to use the company's cloud, the government’s investment body InvestChile said. In March last year, Amazon Web Services signed a memorandum of understanding with Chile “to modernize government services within the country.”

The country has aggressive plans to improve its connection to the wider Internet. Earlier this year, it awarded Huawei Marine with a contract to build a 2,800km (1,740 mile) submarine cable connecting the country’s far south to its north. This will serve as a preliminary step ahead of a proposed 24,000km (14,900 mile), $650 million cable to China. 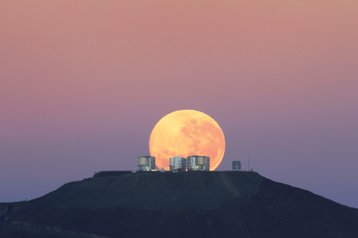 President Sebastian Pinera’s center-right government last week announced plans to combine the data from all of its telescopes onto a single virtual observatory stored in the cloud, but provided little further details around timing, budget, or potential service providers.

Due to the cloudless skies of the northern Atacama desert, Chile lays claim to some 70 percent of global astronomy investment. Among others, it is home to the Very Large Telescope, the most productive ground-based facility for astronomy, as measured by scientific papers. The even larger 'Extremely Large Telescope' is set to launch in 2024 - the world's largest optical/near-infrared extremely large telescope now under construction, it aims to gather 100 million times more light than the human eye.

Jeffrey Kratz, AWS’s GM for public sector for Latin American, Caribbean and Canada, told Reuters: “Chile is a very important country for AWS. We kept being amazed about the incredible work on astronomy and the telescopes, as real proof points on innovation and technology working together.”

Google was also keen to highlight its interest in the region, with a spokesperson telling the publication it will announce plans to expand its existing Chilean data center on September 12. The company is a member of Chile’s Large Synoptic Survey Telescope, set to be fully operational in 2022, but the company declined to comment about whether it was pursuing further astronomical collaboration.

In addition to the financial incentives of the virtual observatory contract, both AWS and the Chilean government are said to be interested in the potential use of tools developed for the studying of stars being used elsewhere, from shoplifting tracking to targeted advertising.

AWS already provides some cloud services for the Hubble Telescope’s data and the International Centre for Radio Astronomy Research.