NextDC has officially opened its Tier IV data center in Perth, with a ribbon-cutting ceremony. 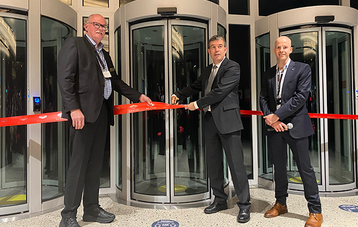 A first in Perth

NextDC gave several details about the data center in a brochure revealing the facility will target a PUE of 1.15 - 1.29 and is located in Perth's Central Business District (CBD).

“We are immensely proud of the hard work and innovative thinking that has gone into building P2, which is our first Tier IV data center in Perth, and we are thrilled to officially open the doors to WA (Western Australia) customers," CEO Craig Scroggie said.

NextDC’s clients at P2 will also be able to connect to cloud on-ramps for Microsoft ExpressRoute and AWS, which are hosted at NextDC’s other Perth center, P1. This will be done through AXON, NextDC’s cloud interconnection service.

P2 also has links with two submarine cables that connect Perth to South-east Asia and Sydney. The data center will link with the dual cable Indigo system, Indigo West connects Singapore to Perth via Jakarta and its sibling cable, Indigo Central, connects Perth to Sydney.

Selling a piece of yourself

This expansion was pricy for NextDC, which had to resort to selling shares at a discount to raise funds for P2 and another planned data center in Sydney, S3.

NextDC’s 12MW S3 will follow P2 with the initial load expected to go online in the 1st half of 2022.

Back in 2019, NextDC launched a micro data center at the location of P2. Billed as NextDC’s first edge data center, the P2 microsite is a prefabricated, standalone site within the much bigger campus.

The microsite serves as an interconnect and telco room with connectivity to NextDC’s existing P1 data center located 13km northeast.

“The new P2 microsite is an exciting and innovative piece of infrastructure for Perth, which partners are already signed up to co-locate in and deliver their services from. P2 will become central Perth’s most important IT, cloud, and connectivity infrastructure platforms, and the P2 microsite is set to give it an incredible head start,” said Simon Cooper, the COO at NextDC.

The Australian Minister for Innovation and ICT, Dave Kelly, said: “The McGowan Government recognizes the critical importance of data to WA’s economic development and job growth.

“I’d like to congratulate NextDC on the official opening of their new data center here in Perth. This significant investment in Perth further connects Western Australia to the global economy and is yet another example of why WA is a great place to do business.”