Billed as NextDC’s first edge data center, the P2 microsite is a prefabricated, standalone site within the compound where P2 is being built to offer host interconnection services "while the main hyperscale is constructed". 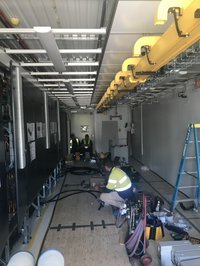 The micro site under construction – NextDC

Hyperscale site gets an edge

"This new addition to the NextDC footprint will be a place for partners to colocate and run their services from now, not 18 months from now," said a NextDC blog about the micro data center. "Additionally, we will do this without distracting the P2 main build project team."

P2 could extend to 20MW, and NextDC plans to have the first 1MW online during 2020. The permanent microsite is "built to Uptime Institute (UTI) Tier III standards" according to NextDC, and will serve as an interconnect and telco room with connectivity to the NextDC’s ecosystem and the existing P1 data center located 13km northeast of Perth’s CBD.

Customers that go live at P2 microsite today will have the ability to deliver services from the 20MW P2 data center the day it launches.

To that end, the P2 microsite is pre-fitted with racks for telecoms and connectivity partners and has the appropriate fiber access infrastructure in place. It has links to public cloud services such as Amazon Web Services (AWS) Direct Connect and Microsoft Azure, as well as metro, national and international connectivity.

At least one customer has already bought into this idea. According to NextDC, Superloop is the P2 microsite’s first customer. It is understood that Superloop is offering connectivity for the Indigo subsea services directly from the P2 site.

“The new P2 microsite is an exciting and innovative piece of infrastructure for Perth, which partners are already signed up to co-locate in and deliver their services from. P2 will become central Perth’s most important IT, cloud and connectivity infrastructure platforms and the P2 microsite is set to give it an incredible head start,” said Simon Cooper, the Chief Operating Officer at NextDC.