Anarchists attack Greek government data center with petrol bombs; "next time we will not attack windows and walls"

No one hurt in nighttime attack

An anarchist group fire-bombed the outside of a Greek government data center in a protest against surveillance and the arrest of 14 individuals.

Indymedia Athens claimed responsibility for the October 10 attack, adding "next time we will not attack windows and walls." 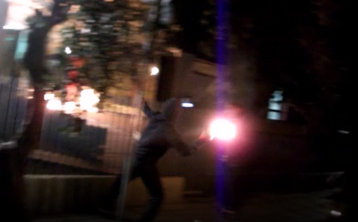 Approximately seven petrol bombs are shown being thrown at the building in a grainy video posted by the group. Most explode in the car park, with a few hitting the sides of the office and data center. No one was hurt in the attack.

The General Secretariat for Public Administration Information Systems building in Moschato hosts the primary gov.gr domain used by most government sites and services.

In a post taking credit for the attack, Indymedia said (translated) that the "Greek central administration wants a digitized database to fight lawlessness - or rather for its absolute control." The group pointed to a secretive deal between the Greek government and the controversial big data and surveillance business Palantir.

Indymedia claimed that the government was targeting those that spoke out, and that 14 'comrades' had been detained and were being forced to give over DNA. "Our action in the General Secretariat of Information Systems is a sign of solidarity with the comrades."

The data center is but one of dozens of bombings and arson attacks across Greece this year, with critics claiming the right wing New Democracy party used the pandemic to justify a number of repressive policies aimed at crushing far left and anarchist groups.

This month, unknown individuals blew up an incendiary device at the office of New Democracy MP Yiannis Kallianos.

Earlier this month, a man in the US was sentenced to 10 years for trying to blow up an Amazon Web Services data center. Earlier this year, a New York Police Department intelligence report warned that conspiracy theorists and far-right white supremacist groups are “increasingly targeting critical infrastructure to incite fear, disrupt essential services, and cause economic damage with the United States and abroad." The report detailed several attacks on cell towers, and threats of greater attacks.

On Christmas Day, 2020, Anthony Quinn Warner blew himself up next to an AT&T facility, causing significant damage to the facility. An FBI investigation said that he was motivated by paranoia and conspiracy theories, but that it did not appear that he was targeting the AT&T building.