OVHcloud has announced plans to restore services in its surviving Strasbourg data centers, after a fire engulfed the SBG2 facility on Wednesday, March 10.

OVHcloud, the largest European cloud provider, expects SBG3 should have power from Wednesday, March 17, and the other two data centers, SBG1 and SBG4 will not get power until Friday. However, while servers in SBG1 and SBG4 will be restarted over two days, servers in SBG3 could take six to eight days to restart, according to a tweet from OVHcloud founder Octave Klaba. Four rooms of SBG1 were destroyed along with SBG2.

Meanwhile, the service provider has emailed all customers, and published a status page listing the status of all services, including whether data will be recoverable or not in the long term. The fire caused data loss at several online services, including the Rust videogame.

Earlier, OVHcloud had hoped it might have power back to SBG1 and SBG4 by Monday, but more than 60 engineers on site have been taking a cautious approach to restoring power and restarting the infrastructure.

Each part of the infrastructure is being tested using power from the on-site generators, before it is handed over to the grid. The data centers have been connected to power and to the network grid temporarily, according to a table in a March 14 announcement from OVHcloud. SBG3 will be getting needs a new network room tomorrow, and all three data centers will have their internal network redeployed on March 17.

The physical effects of the fire are still being managed, according to the update, which says the SBG3 building should be dried out by now, and soot in the SBG3 server rooms will be cleaned from tomorrow (Tuesday, March 16). 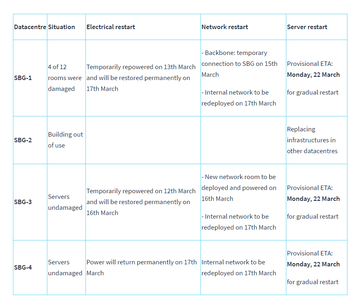 Bare metal, hosted private cloud and public cloud customers are being offered replacement servers in OVHcloud's Roubaix (RBX) and Gravelines (GRA) data centers elsewhere in France. "We are committed to providing around 15,000 new servers in the coming weeks," says the company, which has stepped up production of custom server racks in its Roubaix factory.

Klaba has promised OVHcloud will provide full information, sending an email last week "to each customer with his specific situation and the options."

For all customers, OVHcloud recommends starting services in Roubaix or Gravelines: "Free months will be applied asap."

Investigations continue as to the root cause of the fire but, last week, Klaba suggested that one of the uninterruptible power supplies at SBG2 was a prime suspect, saying that UPS 7 received maintenance from the manufacturer the day before the fire broke out, and UPS 7 and UPS 8 were ablaze when firefighters arrived.