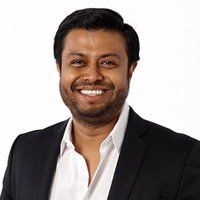 Robin Khuda is an experienced entrepreneur focused on building high growth and successful technology companies in the Asia-Pacific Region. In 2018, he was awarded "Asia Pacific Business Leader of the Year" by DatacenterDynamics and was named in Tech in Asia's "Top 30 Tech Startup Founders" for his significant contributions and innovations to the technology sector. Mr Khuda is the Founder & CEO of AirTrunk, a leading hyperscale data centre operator in the Asia-Pacific region supporting the growth of cloud, content and enterprise customers. AirTrunk pioneered hyperscale data centres in the Asia Pacific and has since become the largest data centre business in Australia by deployed capacity. The company’s third data centre in Singapore is due to open in mid-2020. AirTrunk is backed by Goldman Sachs and TPG Sixth Street Partners providing strong balance sheet for growth. In addition to over A$1 billion investment in Australian market in less than two years, Mr Khuda will oversee AirTrunk’s rapid expansion across the Asia-Pacific region and multi-billion-dollar investments in coming years. Prior to founding AirTrunk, Mr Khuda held leadership roles at both large and high-growth technology companies for over a decade including: NEXTDC, PIPE Networks, Fujitsu, SingTel Optus and Cheung Kong Communications Group. Mr Khuda received his MBA from Manchester Business School, UK, with a specialisation in Finance. He is a Certified Practising Accountant (CPA), and received his Bachelor of Business in Accounting from the University of Technology, Sydney. He has also undertaken additional executive programs in corporate strategy and mergers and acquisitions at Harvard Business School and the Wharton School.