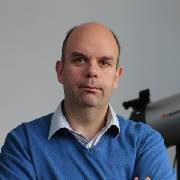 Alberto started his career in the air conditioning industry in Italy in 2001 and has since dedicated most of his working life to the automation and control of cooling units for data centers.

As Development Manager, he is now leading the innovation roadmap for Airedale’s Commercial Controls department.

Alberto joined Airedale in May 2008 as Project Manager in the Commercial Controls department, after having worked for a world leading manufacturer of controllers dedicated to HVAC applications. His in-depth component knowledge, coupled with the application experience he has since gained at Airedale, makes him one of Airedale’s leading experts on data center controls.

In 2018 Alberto took over the role of Product Manager for Airedale’s in-house BMS solution, ACIS and has been instrumental in developing enhanced data center functionality, including a leading-edge PMS (Power Monitoring System). Alberto’s role was expanded to Development Manager in 2022, giving him complete oversight of Airedale’s Commercial Controls product roadmap.