One hyperscale customer wants 10 data halls, built by Atkins and run by Vantage

Vantage Data Centers has been granted permission to build a two-story data center at its UK subsidiary NGD in Newport, Wales. The data center will be run by Vantage and is intended for a single hyperscale customer.

Newport City Council granted permission this week, after hearing concerns about loss of parking and air quality. The planning documents, filed by Vantage's engineering partner Atkins, describe a 24,000 sq m (260,000 sq ft) facility with ten data halls, each supported by six 1.6MW diesel generators. The site will employ 40 people and have car parking space for 40, according to the application. 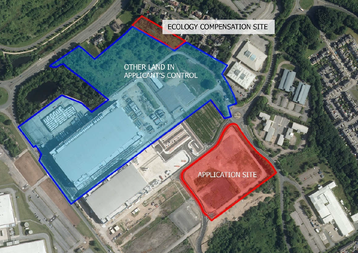 NGD (Next Generation Data) has operated a data center for ten years in the former LG Electronics factory. In 2020 it was bought by Vantage, a US-based hypsercale data center operator, with financial backing from Colony Capital. Vantage is now pushing ahead with development on the remainder of the LG site, which has been disused since the electronics firm moved out more than 20 years ago. The whole site is leased from the Welsh Government.

This new application is for a single massive building described as "Data Centre 3" with data center space on the first floor, with plant rooms and support rooms on the ground floor beneath. There will also be a 4m fence with a security post at the entrance.

There will be 1,500 sq m of office space. The remaining 24,000 sq m is for the data center. The ten data halls will be arranged in two rows of five, on either side of the corridor. Each hall will be served by six 1.6MW diesel backup generators, one of which is a redundant spare with the other five allocated to the usable load.

This gives a total power capacity of 80MW, working out at 300W per sq ft of data center space.

The application was filed by Atkins, in the name of NGD, not Vantage, although Vantage's site now describes the site as "formerly Next Generation Data (NGD)."

Councillors welcomed the proposal but raised concerns. “It’s fantastic to see this futuristic development but my concern is the scientific emissions and the actual sound,” said Councillor John Guy, according to the South Wales Argus.

Vantage has been on an expansion trail, having bought European provider Etix Everywhere early in 2020, and announced five hyperscale campuses on Etix properties. Vantage is also building new facilities in Santa Clara and Ashburn.