Supercomputing company Cray has signed three high-performance computing contracts with the US military worth more than $71m.

The US Air Force will acquire a Cray Shasta supercomputer, while the Army Research Lab (ARL) and the US Army Engineer Research and Development Center (ERDC) will each deploy a Cray CS500.

The Air Force's $25m system will be acquired by the Air Force Life Cycle Management Center in partnership with Oak Ridge National Laboratory.

Named HPC11, it will be used for operational weather forecasting and meteorology, providing higher fidelity weather forecasts for US Air Force and Army operations worldwide, under the purview of the Air Force's 557th Weather Wing.

“The system’s performance will be a significant increase over the existing HPC capability and will provide Air Force Weather operators with the ability to run the next generation of high-resolution, global and regional models, and satisfy existing and emerging warfighter needs for environmental impacts to operations planning," Steven Wert, program executive officer digital, Air Force Life Cycle Management Center (AFLCMC) at Hanscom Air Force Base in Massachusetts, said.

AFLCMC previously installed an HPE supercomputer for the same task - Thor, installed in 2016 by contractor Northrop Grumman, was the 150th most powerful supercomputer in the world at launch. Before Thor, Army and Air Force weather predictions relied on data from the United Kingdom Meteorological Office.

“Knowing accurate weather forecasts has always been a military imperative,” said Dr. Frank Ruggiero, Thor’s lead engineer at AFLCMC-Offutt AFB, Nebraska, said in 2017. “Going back to D-Day, one of the major reasons that operation was successful was surprise. That surprise was generated partially because the Germans did not have accurate reads on weather in the North Atlantic. They thought we couldn’t invade June 6, 1944, because the weather wasn’t good enough.”

HPC11 will feature AMD's newly announced Epyc CPUs, and boast eight Shasta cabinets in a dual-hall configuration. It is expected to be delivered in Q4 2019 and accepted in early 2020. 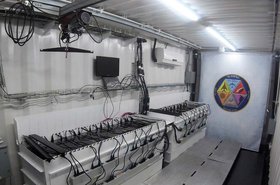 GRC details immersion cooling deployment for the US Air Force

Plus, Hill Air Force Base is looking into upgrades

For Cray, the HPC11 system will its first Shasta delivery for the production weather segment. Peter Ungaro, president and CEO at Cray, said: “The years of innovation behind Shasta and Slingshot and the success of prior generations of Cray systems continue to demonstrate Cray’s ability to support demanding 24/7 operations like weather forecasting.

"This is a great example of the upcoming Exascale Era bringing a new set of technologies to bear on challenging problems and empowering the Air Force to more effectively execute on its important mission.”

Cray, which is currently being acquired by HPE, is building two exascale supercomputers - Aurora and Frontier - as well as the pre-exascale Perlmutter supercomputer at NERSC - all of which are Shasta systems.

But life remains in Cray's CS series of cluster supercomputers: Under the Department of Defense's High Performance Computing Modernization Program (HPCMP) annual technology procurement known as TI-18, the military plans to pick up two CS500 systems for more than $46m.

One will be used by the Army Research Lab, which earlier this month spent $12m on an IBM supercomputer in a shipping container.

In a 2016 Technical Implementation Plan, ARL said it aimed to "provide 100 Petaflop computing power in the battlespace to enable real-time processing for Soldiers operating at the tactical edge and improve mission effectiveness and mitigate risk in hostile environments."

That performance would be achieved by "aggregating the computing processing power of deployed friendly computing devices through distributed computing, supplemented by the projection of mobile customized HPC platforms operating at the tactical edge (tactical cloudlets), a new level of capabilities is possible for mounted and dismounted Soldiers." 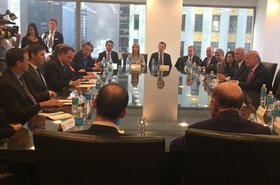 As Trump signs a vague executive order, here's what you actually need to know

Under its infrastructure needs, ARL said that it plans to deploy a "state of the art petascale computer system" in FY16-FY20, as well as "experimental computer platforms to create and exercise novel communication and data transfer schemes."

The other Cray CS500 supercomputer will be deployed by the US Army's Engineer Research and Development Center (ERDC).

Under ERDC is the DoD Supercomputing Resource Center (DSRC) at Vicksburg, Mississippi, which in 2016 acquired a Cray XC40 for $26.5m. Set inside the ERDC Information Technology Laboratory (ITL), DSRC typically operates two or more supercomputers on an average four-year life cycle

The Vicksburg facility is also home to the Joint Computing Facility, which features some 10,000 square feet of raised floor space.

Workloads underway at the site include research into nanotechnology, under the ERDC Advanced Materials Initiative.

“We’re proud to continue to support the DoD and its advanced use of high-performance computing in providing ARL and ERDC new systems for their research programs,” Cray CEO Ungaro, said.

“We’re looking forward to continued collaboration with the DoD in leveraging the capabilities of these new systems to achieve their important mission objectives.”

Both systems are part of the High Performance Computing Modernization Program. Last year, when HPCMP announced the purchase of two HPE supercomputers, it said that its total computing power across various DoD Supercomputing Resource Centers was 47 petaflops.