The 13.5 petaflops system named after a writer and a painter, will arrive in two phases this year

The KTH Royal Institute of Technology in Stockholm has ordered a 13.5 petaflops Cray EX supercomputer from HPE.

The machine will replace the Institute's current Cray XC40 system Beskow, at the PDC Center for High-Performance Computing on KTH’s main campus in the Swedish capital. The first phase, with 65,000 CPU cores, will come online in July 2021, while the GPU-based second phase will be running in January 2022.

State of the art supercomputing 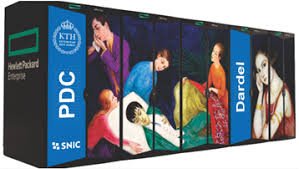 The Dardel supercomputer will include high-speed HPE Slingshot networking, and next-generation AMD Epyc processors as well as AMD Instinct GPUs. It will be used by Swedish researchers to tackle research areas including computational fluid dynamics, biophysics, and quantum chemistry. Industrial partners using supercomputers at the PDC include truck manufacturer Scania, and consulting firms such as Sweco, Tyréns, and FSDynamics.

Naming supercomputers after authors and artists is a tradition at the Royal Institute: Dardel's predecessor was named after children's book writer and illustrator Elsa Beskow (1874 to 1953), known as "the Beatrix Potter of Scandinavia".

Cray EX systems have recently been ordered by the US Air Force and the US National Center for Atmospheric Research.