Emergency ground segment seems to be up and running already

According to unofficial Starlink Coverage Tracker Starlink.sx, the company has now established an emergency gateway in the Fijian capital of Suva. 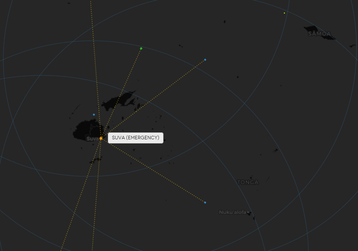 Tonga’s Acting Prime Minister Aiyaz Sayed-Khaiyum tweeted last week that SpaceX was to erect a temporary satellite ground station in Fiji in the wake of the volcano eruption that severed the island nation's subsea Internet cables.

“A @SpaceX team is now in Fiji establishing a Starlink Gateway station to reconnect Tonga to the world. Great initiative, @ElonMusk,” he said.

Sayed-Khaiyum said the engineers would establish and operate a temporary ground station in Fiji to provide an Internet gateway for Tonga for six months. He also said SpaceX has shown interest in providing Internet services in Fiji and the government will advance discussions should they put forward a proposal in full.

According to the tracking site, SpaceX has 14 permanent ground stations in Europe and Turkey, more than 40 in North America, 14 in Latin America, 25 in Australasia, and others on islands including Guam and Puerto Rico. It has none in Asia or Africa.

Last month, a large underwater volcano erupted close to Tonga, triggering tsunamis reaching heights of almost three feet in places. Both the international Tonga Cable – laid in 2013 and running 827km to Fiji – and the Tonga Domestic cable connecting the islands of Vavaʻu, Lifuka, and Tongatapu were damaged, and repairs are ongoing.

In the wake of the disaster, SpaceX CEO Elon Musk offered to provide Starlink services to the island, tweeting: “Could people from Tonga let us know if it is important for SpaceX to send over Starlink terminals?”

While some local services are operational in the main cities and some satellite Internet is available – more so after a block on Kacific providing services in the company was removed – connectivity in the country remains limited.

The country is currently relying on satellite communications, but capacity isn’t keeping up with demand. CEO of Tonga Communications Corporation, Sione Veikoso, recently said total capacity at the moment was around 250 megabits per second, compared to more than 2,000Mbps in demand.

Intelsat is providing space-based emergency broadband connectivity to the country via its Horizons 3e and Intelsat 18, while partners Telstra and Spark are providing the ground infrastructure, including VSAT hubs at their teleports, uplink, internet access, and remote kits. Intelsat previously provided satellite capacity to Tonga via Horizons 3e and Intelsat18 during its 2019 outage.

Repairs to the broken cables were originally expected to take around two weeks, but are looking likely to take longer. Tonga Cable Ltd. said an ROV (remotely operated vehicle) from the cable repair ship Reliance could not locate the break, which has likely been moved due to shockwaves or mudslides, further delaying repairs.