This is the seventh project planned by Stack in a year

Stack Infrastructure (Stack) is planning to build a 150MW data center on a 79-acre site in Phoenix, Arizona.

The facility, on the Avondale Techplex, a new site designated as a data center campus, will cover 100,000 sq m (1 million sq ft), and have access to renewable power from Arizona's many solar utilities. 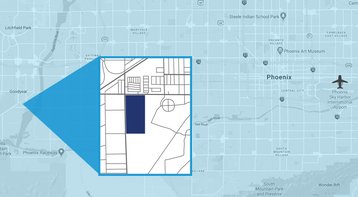 The planned location of the data center – Stack Infrastructure

Arizona has the nation’s lowest statistical risk of natural disasters such as earthquakes, hurricanes, tornadoes and flooding - but more importantly the state has also granted tax incentives to data centers. Stack says the Phoenix site has been given a 10-year tax waiver as well as state and local sales tax rebates for both data center equipment purchases and labor expenses.

“Stack sees tremendous potential in Phoenix. The access to power, fiber, and land provides an outstanding opportunity for scale, and the State of Arizona and City of Avondale teams are true partners,” said Brian Cox, CEO of Stack. “This new market is one of the nation’s most important hyperscale availability zones and will afford our clients unparalleled access to scalable capacity, renewable energy, and sustained growth in the southwest.”

Last month, Stack announced plans to expand its footprint in Atlanta, by developing a second data center on a six-acre plot of land adjacent to its current campus near Atlanta. The planned 12MW facility will more than double the campus’s capacity. This was Stack’s sixth expansion projects announced over the past year.

In January, Stack announced plans for a 125-acre hyperscale data center campus in Prince William County, Virginia, and a 32MW data center on its campus in San Jose, California.

In October 2019, Stack bought a Tier III data center in New Albany, Ohio. Previously, in September 2019, it made plans for an 80MW expansion of its Portland data center campus. June 2019 saw plans made for a 20MW data center adjacent to its existing facility in Chicago.