Stack to build in Portland

Stack Infrastructure has announced plans to build a second data center in Portland, the third such plan it has made in six months since it raised $850m by selling shares in its existing sites to equity investors. 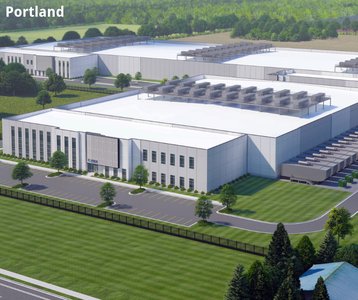 Stack plans to build another data center in Portland for clients who were looking to grow there, it said in a press release. Two thirds of its business was with just five large companies, ratings agency Standard & Poor's (S&P) said in January. Most of its customers were in big data, telecoms and media. Hillsboro, outside of Portland, was connected to international markets by a subsea cable, said Stack.

"Portland is a key market for our clients and, consequently, for Stack," said Matt VanderZanden, Stack chief strategy officer, in a press release.

"Its unique attributes are proximity to key user bases, excellent network and electrical infrastructure, and sources of renewable energy," he said.

"This is only the beginning of the presence Stack intends to build," said Brian Cox, Stack chief executive officer. "We view this as a high-priority market for ongoing investment."

The build would, he said, be "a significant, long-term expansion in Hillsboro." It was where its first data center was built in 2012. "It is where we’ve built some of our most important and enduring client relationships," said Cox.

Investment fund IPI Partners raised $850m to build more data centers in January, shortly after it created Stack Infrastructure by combining six data centers it had acquired from other companies. It raised the money by selling equity shares in the centers, their mortgages and their contract income, in Atlanta, Chicago, Dallas, Northern Virginia, Portland, and Silicon Valley.

"Data outsourcing needs will continue to grow exponentially," S&P said when it assessed Stack's stock offering at the time. It reckoned 80 percent of US companies were still doing their data centers in-house.

Stack's six data centers had a built capacity of 63MW, said S&P at the time. Stack said, when it was then seeking investors, it had 100MW capacity. Last week, it said its new builds would "bring total capacity to nearly 100MW," by adding 60MW.

S&P said there was "limited supply and strong demand for wholesale data center space" in the locations where Stack had centers. They also had low electricity costs compared to neighboring towns.

Stack's six were worth about $500m, and made about $78m a year in rent, said S&P. Stack had sold about 60 percent of their value as shares.

Stack said in June it planned to build a second data center in Chicago. It would be a multi-story site with 20MW capacity. Its existing site had 13MW. In January, it said it would build another Texas data center at a computer campus operated by Hillwood, a real estate firm that has a strategic alliance with Stack parent IPI.