Another campus comes to Prince William

Stack Infrastructure has broken ground on a new data center in Virginia.

The company this week announced the groundbreaking of its NVAL3 hyperscale campus in the center of Prince William County. 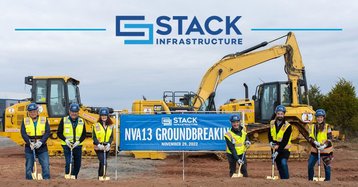 Delivery of the first 36MW building, known as NVA 13, is targeted for Q1 2024. The 40-acre site will add nearly 100MW of committed and scalable power from Northern Virginia Electric Cooperative (NOVEC).

“Expanding our presence in the heart of Prince William County represents a strategic approach of continuing to deliver scalable capacity where it matters most,” said Matthew VanderZanden, Chief Operating Officer of Stack Americas. “Powered with 100 percent renewable energy, Stack’s new campus offers a sustainable solution and allows our clients the ability to grow quickly in the world’s largest data center market.”

Stack acquired two plots of land in Manassas from AWS in December 2021 located at 10675 University Blvd. and 9650 Innovation Drive. In April 2022 it subsequently announced plans for a 34-acre, 84MW data center campus but never confirmed if it was at the recently-acquired site; at the time Stack said the project will comprise a minimum of two buildings spanning 602,000 sq ft (56,000 sqm). The first phase was to be delivered in Q3 of 2023.

Though the company said the groundbreaking is for that campus announced in April, DCD has asked Stack for clarification on whether that site is in fact the University Blvd/Innovation Drive plot, and if not, where the new campus is located.

The company has a sizeable presence around Northern Virginia across Loudoun and Prince William Counties and says it has nearly 1GW of current and under-development capacity in the area.

In early 2020 Stack announced plans for a 125-acre data center campus along Hornbaker Road in Prince William County, Virginia. The first phase spans 25 acres with 700,000 square feet (65,000 sqm) of data center space and 72MW of critical capacity. At full build-out, the build-to-suit campus could reach 250MW of critical load and 4 million sq ft (371,600 sqm) of data center space. It acquired an additional 25 acres in May 2021 and announced phase two expansion of the site in October 2021, aiming to bring an additional 36MW of capacity online starting in Q4 2022. It bought an additional 60 acres for the campus in September 2022.