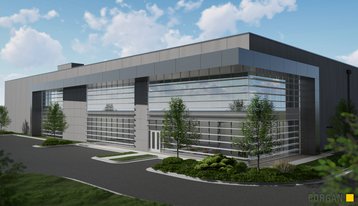 Taylor Chess, president of development for the Peterson Cos., confirmed to BJ that the land purchases by Stack were part of this previously announced campus. Peterson is serving as the project's developer.

“That rounds out the entire campus. All of the properties that we had originally assembled and rezoned is on that Hornbaker campus,” Chess said. “Different sites were ready at different times. That’s why it didn’t look contiguous at the time.”

Three of the four buildings on the campus are already built or in development. A substation is also planned. It acquired an additional 25 acres in May 2021 and announced phase two expansion of the site in October 2021, aiming to bring an additional 36MW of capacity online starting in Q4 2022.

“Now that they’ve acquired the other two sites, they’ll probably start building [on] those relatively soon,” Chess said. “All of the development on the Hornbaker property is well underway.”

The Hornbaker site is one of three data center campuses Stack has in development in Northern Virginia.

Stack acquired two plots of land in Manassas from AWS in December 2021, and subsequently announced plans for a 34-acre, 84MW data center campus; the project will comprise a minimum of two buildings spanning 602,000 sq ft (56,000 sqm); the first phase will be delivered in Q3 of 2023.