SafeHost has contracted Webuild Group, through its subsidiary CSC Costruzioni SA, to build an additional 18MW of capacity at the facility, located between Lausanne and Geneva.

The CHF 131.5 million ($142.5 million) construction project will be carried out by CSC in a joint venture with the Titanium Swiss Group. Work is due to begin in July and projected to be complete within 18 months. 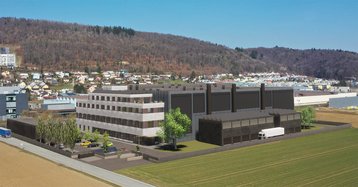 SafeHost's SH5 data center in Beringen; construction is due to start later this year – SafeHost

SafeHost currently has three data centers around the Geneva area, with a fourth, SH4, currently being built in Rafz outside Zurich.

In April the company announced it was building a fifth facility in Beringen, in the Schaffhausen Canton north of Zurich. The SH5 data center is due to be developed in the Beringen industrial quarter on the site on a former tennis club.

As well as solar panels on the roof and rainwater cooling, the on-site office complex will be heated with the waste heat generated by the data center. Construction work is to begin this year after the building permits have been obtained.