Oracle sure isn't happy to lose out

Oracle has appealed a legal challenge over the US military's $10bn JEDI contract, which was dismissed in July. The appeal comes weeks after the contract was finally awarded to Microsoft.

Oracle claimed that the Joint Enterprise Defense Infrastructure (JEDI) cloud project was tailored for Amazon Web Services (AWS). That claim was dismissed in July by the US Court of Federal Claims, but on Friday Oracle resubmitted the same argument before the courts. 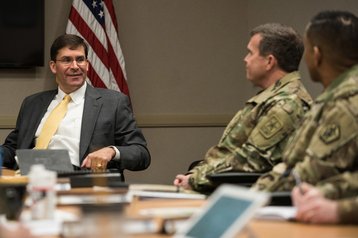 Oracle says the DoD violated federal procurement law, and JEDI was the result of relationships between former Pentagon officials and Amazon, Bloomberg reports. The contract will consolidate the Defense Department’s cloud infrastructure and modernize its systems, controversially replacing myriad current systems with an umbrella deal giving one cloud provider access to the majority of the military’s cloud.

Meanwhile, Amazon is also considering a challenge of its own, having lost to Microsoft.

IBM and Oracle, the two candidates who failed to get past the criteria stage, very quickly made allegations about the fairness of the contract after they were dropped.

IBM accepted the court's decision to dismiss its claims, but Oracle has yet to give up. It alleged that AWS promised lucrative jobs to two Pentagon officials involved with JEDI. It also accused AWS of a conflict of interest in hiring back a former Amazon employee, Deap Ubhi, who went to the DoD in 2016, worked on the contract, and returned to Amazon, joining AWS as a general manager in 2017.

A DoD investigation concluded there may have been “potential ethical violations” with the rehiring, but cleared AWS of creating an organizational conflict of interest. Despite the failed investigations and legal challenges, Oracle's lobbying efforts continued

Among other things, Oracle lobbyists produced a document on the JEDI saga, which eventually reached Donald Trump's desk. The document included a flowchart titled "A Conspiracy to Create a Ten Year DoD Cloud Monopoly," which includes images of Defense Secretaries Ash Carter (pictured alongside President Obama) and James Mattis, along with representations of dollar signs, arrows and a heart linking the various figures.

Guy Snodgrass, a speechwriter to former Defense Secretary Jim Mattis, alleged that Trump told Mattis to “screw Amazon” and lock it out of the bid back in 2018. Mattis didn’t do what Trump asked, Snodgrass wrote.

Since then, the new defense secretary Mark Esper took up the review but then recused himself from it - only a day before the contract was awarded to Microsoft.