Citing three sources familiar with the matter, CNN reports that White House officials in recent weeks showed Trump the document, which is identical to one created by Oracle's top Washington lobbyist, Kenneth Glueck.

Currently set to be awarded to either AWS or Microsoft Azure next month, the Joint Enterprise Defense Infrastructure contract could be worth $10bn over 10 years (although it will initially run for two years), and will see the bulk of the world's largest military's IT needs be handled by a single cloud provider.

That fact alone has proved controversial, and seen some criticism be leveled against the Department of Defense. But, crucially, the contract has also been dogged by claims that it was written to favor AWS, an allegation spread in part by Oracle lobbyists and Oracle-funded think tanks.

Oracle alleges that AWS promised lucrative job offers to two Pentagon officials involved with the JEDI process. In particular, Deap Ubhi previously worked for Amazon and then spent 18 months at the US Digital Service (USDS) before returning to AWS. It is alleged that during his year-and-a-half stint he engaged in "highly technical" discussions with potential JEDI competitors and had access to a drive with information on the procurement.

Oracle took the DoD and Amazon to court over its claims, but the case was dismissed earlier this month. Separate challenges by Oracle and IBM to the Government Accountability Office were also dismissed. A DoD investigation concluded there may have been “potential ethical violations” involving Ubhi but cleared AWS of creating an organizational conflict of interest by hiring him.

Despite the investigations and legal challenges failing to find proof of its allegations, Oracle's lobbying efforts continue to spread the narrative that Amazon was involved in the creation of JEDI.

The document that reached the US President contains a flow chart titled "A Conspiracy to Create a Ten Year DoD Cloud Monopoly," that suggests that senior military officials were potentially influenced by money. The chart includes images of two secretaries of Defense, Ash Carter (pictured alongside President Obama) and James Mattis, along with representations of dollar signs, arrows and a heart linking the various figures. It makes no specific charges of wrongdoing, however.

Glueck, Oracle's SVP for government affairs, claimed to not know how his document ended up on the President's desk, telling CNN that neither he nor anyone at Oracle, including co-CEO Safra Catz, gave his chart to the White House. He told the publication: "I'm not upset that it's in front of him." Safra Catz, who served on Trump's transition team, previously raised the matter with the President over dinner.

Last week, Trump told reporters: “I’m getting tremendous complaints about the contract with the Pentagon and with Amazon. They’re saying it wasn’t competitively bid... Some of the greatest companies in the world are complaining about it, having to do with Amazon and the Department of Defense, and I will be asking them to look at it very closely to see what’s going on."

That same week, he retweeted a Fox News segment called 'The Bezos Bailout.' Host Steve Hilton said: "President Trump is demanding more information on the JEDI contract and is considering intervening - quite right too. Draining the swamp means stopping this contract... It's not just appropriate, but vital that the President kills this contract...

"Mr President, if you want to keep draining the swamp, don't let the Bezos bailout fill it back up." 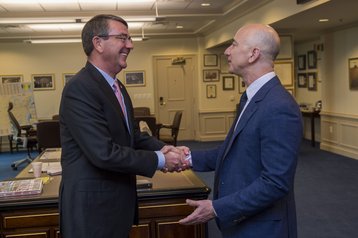 Trump and Oracle are not alone in trying to stop JEDI, with other politicians and industry figures (some with the backing of Oracle) coming out against it.

The Information Technology Acquisition Advisory Council (IT-AAC) is one such group, recently publishing a report aiming to show that the whole concept of a single award multi-year cloud contract is flawed.

As a 'public/private partnership,' it is unclear where IT-AAC gets most of its funding, although it claims to be "a federation of two dozen leading IT industry groups and standards bodies."

Microsoft (a current JEDI competitor) and Google (a failed JEDI competitor) are both listed as involved. It has several partners, including the Object Management Group (a not-for-profit technology standards consortium that includes Oracle and Microsoft), the Cloud Security Alliance (a not-for-profit organization promoting cloud 'best practices,' whose executive members include Google, IBM, Microsoft and Oracle - but AWS is a corporate member).

IT-AAC's board members include employees from Microsoft, Google and IBM. Also on the board is Larry Allen, the executive director of Coalition for Government Procurement, a group which represents Oracle, Microsoft, IBM, Dell among others, and has previously criticized JEDI, as well as defended Oracle in previous disputes.

CEO John Weiler, who was an Oracle employee some 30 years ago, but has since had numerous roles at various standards bodies, industry groups and think tanks, told DCD that the group's objection to JEDI "is NOT about AWS vs Oracle vs IBM vs MS vs Dell vs HPE, [it's] about JEDI being disconnected with DOD CIO’s new Cloud strategy and OMB’s new Cloud Smart policy." In a follow up discussion, he suggested DCD talk to several industry figures, including employees at IBM, Dell, HPE, Microsoft and General Dynamics Information Technology. He did not respond to a question about IT-AAC's funding and how much it receives from JEDI-related companies.

Weiler is also co-founder of another not-for-profit group, Interoperability Clearinghouse (ICH) - and, in fact, the website registrar for IT-AAC is ICH.

ICH previously filed a bid protest with the Government Accountability Office over a $7 million sole-source cloud support contract awarded by the Defense Department to a small company known as Eagle Harbor Solutions. The protest was thrown out, as ICH “is not an interested party to challenge this sole-source award."

With that context, limited as it is, out of the way, let's look at the IT-AAC document and what it claims is wrong with JEDI.

IT-AAC assert that JEDI is "fundamentally incompatible" with the 'DoD Cloud Strategy,' adding that "where the JEDI RFP stipulates a single, static cloud solution, the strategy outlines a rich environment including multiple cloud solutions."

"The JEDI RFP treats cloud at the tactical edge as an integral part of a cloud service and makes no long-term provisions for building out tactical cloud, two technical and architectural mistakes which are not repeated in the Strategy."

In summary, IT-AAC suggest that to "address these shortcomings and protect the interests of the Warfighter, the DoD should rescind and revise the JEDI RFP to ensure consistency with the new approach outlined by the strategy. At this point, with the JEDI RFP already released and competition under way, DoD is committed to assessing solutions against criteria that do not match the direction outlined in its Strategy. Without this adjustment, DoD will embark on a $10 billion, ten-year cloud commitment that will not meet warfighting needs, while also creating significant risk to our most sensitive data by exposing it to commercial networks."

With so much back and forth over JEDI, often from corporate-funded groups, it can be difficult to be sure which voices to pay attention to. But IT-AAC claim to be influential.

Last week, Axios reported on a letter signed by 12 Republican Members of Congress asking for JEDI to be delayed due to alleged conflicts of interest. Soon after, Weiler contacted DCD: "Congress acts on IT-AAC JEDI Report. Asks for delay."