Luke, I am your father

Secretary of Defense Mark Esper has recused himself from the ongoing review of the Joint Enterprise Defense Infrastructure (JEDI) cloud contract due to his son working at IBM.

Deputy Secretary David Norquist will now take up the investigation.

Esper’s son, Luke, is a digital strategy consultant for IBM and has been working there for nine months.

IBM made a bid for the $10 billion contract along with Oracle but both were dropped - IBM complained to the Government Accountability Office in October last year.

In July, President Donald Trump raised issues about the fairness of the competition, which were alleged to favor AWS. This kickstarted a review back in August that is still ongoing. DCD has contacted IBM for comment.

Why did he wait till now?

DoD officials said in a statement: “Although not legally required to, he has removed himself from participating in any decision-making following the information meetings, due to his adult son’s employment with one of the original contract applicants.

“Out of an abundance of caution to avoid any concerns regarding his impartiality, Secretary Esper has delegated decision-making concerning the JEDI Cloud program to Deputy Secretary Norquist.”

Questions remain as to why Esper didn’t recuse himself sooner, but he will now be replaced by Norquist who was selected as deputy secretary in July.

The DoD gave no mention of a timeline or conclusion of the JEDI review, but said: “Procurement will continue to move to selection through the normal acquisition process run by career acquisition professionals.” 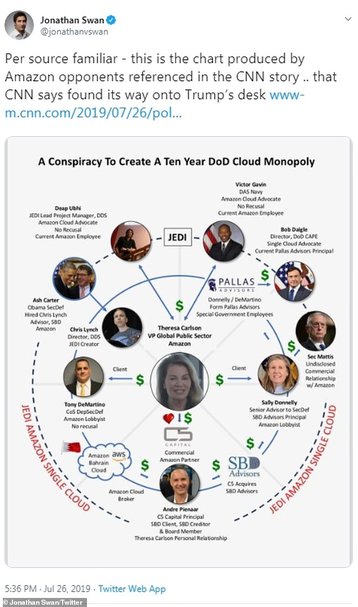 Before the contract was delayed in August, it was just about to be awarded to either AWS or Microsoft Azure, with one company providing the bulk of the world's largest military's IT needs.

The contract faced two major criticisms: One against the fact that it would just go to one company; the other that it appeared to be written to favor AWS, an allegation spread mostly by tech giant Oracle.

Oracle said AWS promised lucrative jobs to two Pentagon officials involved with JEDI and accused AWS of a conflict of interest in hiring an ex-Amazon employee who had contacted JEDI competitors.

A DoD investigation concluded there may have been “potential ethical violations” with the rehiring, but cleared AWS of creating an organizational conflict of interest. Despite the failed investigations and legal challenges, Oracle's lobbying efforts continued.

A document created by Oracle lobbyists eventually reached the US President’s desk showing a flow chart titled "A Conspiracy to Create a Ten Year DoD Cloud Monopoly." The chart includes images of Defense Secretaries Ash Carter (pictured alongside President Obama) and James Mattis, along with representations of dollar signs, arrows and a heart linking the various figures.

Not long after, President Trump declared: "I’m getting tremendous complaints about the contract with the Pentagon and with Amazon. They’re saying it wasn’t competitively bid..."Some of the greatest companies in the world are complaining about it, having to do with Amazon and the Department of Defense, and I will be asking them to look at it very closely to see what’s going on."

Before joining the Department of Defense, Esper was vice president of government relations at Raytheon, a major US defense contractor.

He succeeded Patrick Shanahan as Secretary of Defense in mid-July and, soon after President Trump's announcement, stepped up to conduct the review.

Esper's recusal comes as some in the Defense Department are pushing for a quick decision regarding JEDI. US Army Secretary Ryan McCarthy announced a $1bn data modernization plan, but said it hinged on Congress and whether JEDI could get off the ground.

Earlier this month, the DoD also pulled a $7.6bn back-office cloud contract after a competitor who lost out raised questions about the process.

Pending another review, it appears that it too will not be awarded until the DoD looks at the contract and makes amendments.