Self proclaimed press site of extremist movement gets taken offline 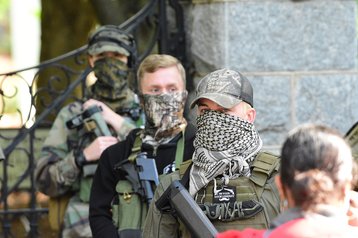 Adherents believe another civil war is coming, and often call for violent action to bring it about, with Boogaloos seeking to fight against the US government. Due to the nature of online movements, exact political stances of Boogaloos can vary wildly - but a significant proportion are also white supremacists who call for a race war.

Members of the movement have been linked to murders, attempted murders, shooting police officers, and terrorism plots.

Boogaloos were at the Capitol attack earlier this month, and there are growing fears that they may carry out more terrorist attacks in the weeks and months to come. They “may exploit the aftermath of the Capitol breach by conducting attacks to destabilize and force a climactic conflict in the United States,” a bulletin issued by the National Counterterrorism Center and the Justice and Homeland Security Departments to law enforcement agencies across the country states.

As their meme roots suggest, Boogaloos are deeply tied to the Internet, using social media platforms to recruit new followers.

Facebook, in particular, served as a platform for Boogaloos to share ideologies and recruit new followers - with the company only cracking down and removing pages with 10,000 members due to media attention in 2020.

In June, following the arrest of three Boogaloo proponents who had allegedly plotted to incite BLM protesters against police in Las Vegas, Facebook said its algorithms would stop promoting Boogaloo groups. It banned the term, and removed hundreds of accounts and groups.

Some Boogaloo members stayed on Facebook, just using synonyms to hide their views. Others shifted to other platforms, including Parler and Gab.

The Tree of Liberty pitched itself as a site for Boogaloos to gather and chat, claiming to be the "press platform" for the movement. It sold T-shirts, hosted podcasts, and published numerous articles aimed at recruiting new followers.

This week, Canada's CBC News tracked down the website's hosting provider - OVH. When CBC contacted the French company, it said that the site had been suspended and "the contract with the client terminated."

“Our network and servers are hosted offshore, meaning that your data and privacy are in the hands of true Patriots," the company said on its now offline site.

Irrelevant background: the term Boogaloo goes back at least to the 1960s, when it referred to Cuban mambo/R&B crossover music by the likes of Willie Colón. It's also a long-established pub and music venue in Highgate, North London.