Orange Egypt will build and operate a data center and cloud computing platform for New Cairo, Egypt’s next capital city.

The Administrative Capital for Urban Development (ACUD) is a state-backed company contracting the telco's regional subsidiary. Daily News Egypt reported on the signing of the contract between Orange and ACUD on January 12.

According to the deal, Orange Egypt will provide the main infrastructure to help the city provide various services in conjunction with IoT solutions, cloud computing, and artificial intelligence.

The new capital city lies just east of Cairo, about 35km (21 miles) into the desert between the regional ring road, the Cairo-Suez road, and Cairo-El Ain El Sokhna road.

Major General Mohamed Abdel Latif, managing director of the ACUD, said the agreement helps the country realize its ambition to build the first out of 14 planned "smart cities" in Egypt. 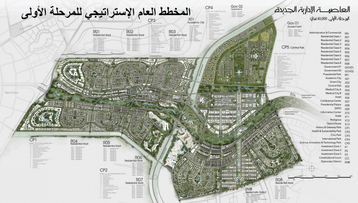 A plan of the new smart city – MHUC

According to the Egyptian government’s website, it expects New Cairo will become the center of Egypt's political, cultural and economic affairs.

The statement (translated) reads: “To ensure the preservation of historical and natural assets owned by Cairo, and to facilitate living in it through an efficient infrastructure, [New Cairo] has been allocated an area of ​​170,000 acres for the establishment of the administrative capital east of Cairo."

In order to draw people to this new capital city, a series of key Egyptian employers such as government offices will be established in the city. Between 40,000 to 50,000 employees are being transferred to the new government site, with the number set to increase to 100,000 after the first three years.

Egypt’s smart city in the desert has not publicly released any spending statistics, however, back in 2015, the Egyptian Government revealed it planned to invest around $45bn.

The 'old' Cairo has become far too cramped to be a sufficient capital city for the country. Built by the Fatimids in 10th century AD, the city has a population of around 20 million people, and like other megacities, suffers from high levels of pollution and traffic.

Therefore, since the country is stocked with a virtually endless expanse of desert, Egypt's government saw fit to just build a new city.

Similar projects have been done in the past such as the 6th of October City. Located in Giza about 20 miles south of Cairo, the site was built to relieve pressure on the local Cairo area. 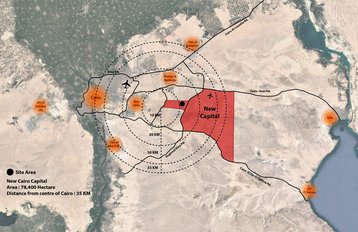 This new city was announced by then-Egyptian housing minister Moustafa Madbouly at the Egypt Economic Development Conference in 2015; construction began shortly after. According to the plans, the city should be able to accommodate around 5-6 million people.

The city plans to have a park double the size of New York City's Central Park, artificial lakes, about 2,000 educational institutions, a technology and innovation park, a major theme park four times the size of Disneyland, 90 square kilometers of solar energy farms, an electric railway link with Cairo and a new international airport at the site of the Egyptian Air Force's existing Wadi al Jandali

"Smart cities" are built around the Internet of Things (IoT), an interconnected network of devices that gather, store, and share data while communicating with one another to improve efficiency. This could take the form of monitoring traffic, transport, power and water supplies, as well as other forms of surviellance.

Smart cities are being planned the world over such as in Malta, Madrid, Manchester Milan, Islamabad, New York, and Singapore.