Several companies and research groups plan to study whether a modular data center can use waste cooling from a liquid natural gas terminal.

Singapore LNG Corporation Pte Ltd, the National Supercomputing Centre Singapore, the National University of Singapore, and government-owned consultancy Surbana Jurong signed a memorandum of understanding this week to work on the project.

The group will explore the development of a proof-of-value 'green modular data center system.' 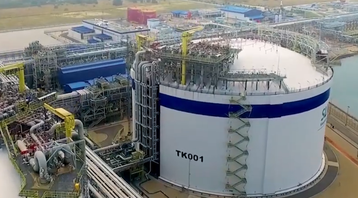 The facility is expected to be capable of one petaflops, and be installed at the Singapore Liquefied Natural Gas (LNG) Terminal on Jurong Island.

Natural gas is cooled to around 113 K (−160°C/-256°F) to become a liquid, before being sent to Singapore. There, it undergoes regasification by passing it through a heat exchanger using seawater. The group planned to use this continuous chilled seawater supply to cool the data center.

How the facility will be powered has yet to be decided, with the group exploring renewable solar energy and hydrogen fuel cell backups.

“SLNG produces a huge amount of cold energy which is partially discharged as chilled seawater. We have the opportunity to tap on this excess cooling source instead of using more electricity to help cool our supercomputer and data centers,” said associate professor Tan Tin Wee, chief executive of NSCC.

“If successful, this prototype will demonstrate the value of industrial symbiosis, where one industry's waste can be converted into another industry’s resource. By combining this with renewable energy such as solar power from photovoltaic farms, the novel concept could be a potential model for future green sustainable supercomputer data centers in Singapore.”

Currently, around 95 percent of Singapore’s electricity is produced using natural gas, which is the cleanest fossil fuel - but is still a pollutant. Natural gas also runs the risk of being an even bigger contributor to climate change if it leaks before it is burned, as methane is 28x better at trapping heat than carbon dioxide.

Singapore has invested heavily in expanding its solar power use in recent years, but a slow start and limited land has meant it will not radically reduce gas use - despite a pledge to increase solar use by seven times by 2030.

The country also plans to import 100MW of green energy from Malaysia, and is exploring importing hydrogen power - as well as using hydrogen from natural gas.