Re-using waste heat from servers is not a new idea, but it remains mired in challenges

When Facebook was looking to Denmark as a key location in its network of global data centers, part of the brief for the designers was to maximize every possible aspect of sustainability. One item on that list was the idea of reusing waste heat from data center cooling systems - a proposal that has excited interest for some time, but has often foundered on the practical realities of implementation.

It doesn’t take complex technology to convert waste heat into something useful. The challenge is the expense, combined with the fact that data centers are often a long way from the locations that can actually do something useful with their second-hand energy.

But that’s changing, and Facebook is just one high-profile proponent, along with Amazon Web Services, Google, and others. In Denmark, Facebook was able to secure a tie-up between its third facility, in Odense, and the local district heating company, Fjernvarme Fyn, to recycle warm air extracted from the ‘hot aisle’ of the data center. 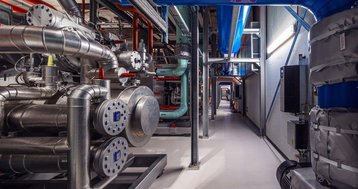 Once the air reaches Fjernvarme Fyn the temperature is boosted using a heat pump – powered by renewable energy – before the water is delivered into the district heating network.

This scheme is expected to recover some 100,000-megawatt-hours of energy per year, which Facebook estimates will warm around 6,900 homes.

The drive behind such sustainability initiatives comes after 10 to 15 years of technology companies and data center operators pushing the power usage effectiveness (PUE) down from above two – the US average is around 2.5 – to figures ever-closer to one, says S&P Global Market Intelligence senior research analyst Daniel Bizo.

Improving PUE means data centers consume less energy. Reusing their waste heat is an additional benefit, but it needs infrastructure. And, while the European Union has been pushing district heating schemes as an environmentally friendlier alternative to electric or gas central heating, these are not widely used outside of Germany, Scandinavia (excluding Norway), and a handful of other places.

The difficulty of finding alternative uses for data centers’ waste heat is illustrated by Google’s latest data center opening in Middenmeer, the Netherlands.

While the company claims it has been able to radically slash power consumption per unit of compute power in its data centers, compared to the data centers it opened less than ten years ago, its waste heat re-use at Middenmeer doesn’t currently extend any further than helping to heat the office space at the data center for its 125 employees.

Erik Barentsen, a senior policy officer, energy and sustainability, at the Dutch Data Center Association notes that there are basically three main forms of data center cooling. The first one, direct air cooling, “is not really applicable for recovering waste heat,” says Barentsen.

“The second is where you have computer room air conditioning, in which the air in the IT room is chilled,” he adds. With servers arranged in ‘cool’ and ‘hot’ aisles, the exhaust air can be extracted, run through a heat exchanger and returned to the cool aisles, helping to lower air conditioning costs, as well as extracting heat for re-use.

However, the typical exhaust heat from an ordinary air-cooled data center is only between about 25 degrees and 35 degrees celsius, he adds, limiting its value without the addition (and expense) of a heat pump to boost its temperature.

The third system, says Barentsen, is by deploying liquid cooling. “Liquid cooling can be done either through immersed technology, where the whole system is immersed in oil and the oil itself is conditioned to a certain temperature, or you can use a closed-loop liquid cooling system,” he says.

The main benefit of liquid cooling, adds Andy Lawrence, executive director of research at the Uptime Institute, is that servers can be run hotter and harder, while higher exhaust temperatures widens the scope for re-use. Using liquid cooling, server racks can be also more densely packed.

“The exhaust heat is going to come out piping hot – above 50 degrees Celsius would be quite common – and using it for hot water or heating would make a lot of sense,” says Lawrence.

“In essence, the amount of waste heat recovered compared to the electrical input will remain the same: 90 percent of the thermal energy that goes into a data center can be recovered,” says Barentsen. “However, at least for the time being, the residual heat temperature will make a difference because with liquid cooling the residual heat is easier to use in a district heating system.”

Even then, there are challenges over how to re-use this resource if there isn’t a friendly neighborhood district heating company willing to take it off of the data center operator’s hands.

The US National Renewable Energy Centre, for example, used excess warm air to heat the pathways around its HQ in Golden, Colorado in order to keep them free from snow and ice in winter, but that is scarcely an efficient use of a valuable resource.

A more practical alternative solution has been developed by Dutch tech company Blockheating, together with consultancy IT Renew. It has devised a containerized data center that can use liquid cooling to maximize heat capture, piping the result to commercial greenhouses – for which the Netherlands is famed – to help keep tomatoes and bell peppers growing throughout the autumn and winter months without the use of gas.

Its 200kW Edge data centers use liquid cooling – enabling more compute power to be packed into a relatively small space – that can be converted into water at a toasty temperature of 65 degrees celsius.

However, the demand for such Edge data centers next to greenhouse facilities is likely to be highly niche, and while gas prices are low it’s unlikely to gain much traction, suggests Barentsen.

What may help drive data center exhaust heat re-use is a combination of the broader corporate push towards carbon neutrality and sustainability – especially among well-heeled organizations that can most easily shoulder upfront expenses – and regulation, particularly in the European Union.

For around the past decade, the EU has been pushing member states to implement district heating schemes, providing funds for start-ups, arguing that district heating is more efficient and less carbon-intensive than either electric or gas central heating.

Indeed, part-funding from the EU is behind a district heating scheme in Dublin, Ireland. South Dublin County Council – under whose authority the Castlebagot ‘digital business hub’ falls – has established its own publicly owned energy company, called Heatworks, to pipe heat from data centers in the hub to the newly established Tallaght District Heating Network.

More recently, there have been calls for tighter regulation of the data center industry, especially following a December 2020 United Nations report claiming that carbon emissions from the construction and operation of buildings now accounts for 38 percent of total global energy-related CO2 emissions. Heating (and cooling) buildings around the world is responsible for just under 10 gigatonnes of CO2 emissions, it claimed.

But for the time being, warns Lawrence, proponents of liquid cooling need to convince an industry geared towards air cooling that it is the way forward.

“The case for liquid cooling is quite strong, but… every designer knows air systems. There’s lots of equipment out there, lots of standardized designs and it’s cheaper in terms of capital outlay,” says Lawrence.