New facility with a potential capacity of 64MW, triples the operator's space in the UK

Global data center operator NTT has opened one building of its London 1 data center in Dagenham, with plans to expand to 64MW there.

The first building, which was announced in 2018, has a capacity of 32MW, and will be filled in modular increments, which are multiples of 1MW. With an eventual capacity of 25,600 sq m (276,000 sq ft), the full site would triple NTT's UK footprint. The facility will employ 100 people, and is located alongside movie studios and other businesses on a site formerly occupied by pharmaceutical firm Sanofi, eight miles from Docklands, the digital hub of London.

DCD visited the site during construction in 2019, and returned virtually for the launch, to find the company is optimistic about the data center sector in the UK, and proud of the environmental credentials of the building. 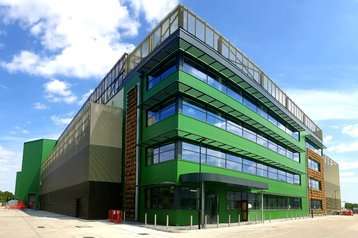 "Britain is emerging as a global leader, more aligned with most countries around the world," affirmed Paolo Maselli, NTT's chief executive for UK and Ireland, in a recorded speech which played a little strangely, alongside the unraveling of the UK-EU Brexit talks. Japanese-owned NTT has chosen to headquarter its data center building arm in the UK, and Maselli was pleased to note that the UK – Japan Comprehensive Economic Partnership Agreement (UKJCEPA), signed on September 28, was the first trade deal to be signed by the UK since Britain began the process of leaving the EU.

"The UK has the best undergraduate and postgraduate education in the world," said Maselli. "Even Silicon Valley banks are pushing funding into UK startups. Britain is historically a financial powerhouse - and well-positioned to be a global powerhouse." NTT is investing £500 million ($660m) in the UK

Perhaps wisely, the recorded speeches steered clear of Brexit and its possible impacts on data localization, but Florian Winkler, CEO of NTT Global pointed out the fact that the process has certainly not dented growth in data centers in the UK thus far: "London is the largest of the four big colo markets in Europe and is enjoying exceptional growth," he said. "Dagenham is close to the City - you can see Docklands from our roof."

The UK government's Minister for Investment, Gerry Grimstone was definitely happy to have some good news, sending a press release quote which said: “Businesses are increasingly demanding infrastructure like this to operate innovatively, securely and efficiently. NTT’s continued commitment to the UK will help us to build and solidify our reputation as a leader in technological innovation in the industries of the future that will help us build back better.”

The data center also includes a Technology Experience Lab, where new technologies and hybrid cloud services can be tested and demonstrated.

The site has no air conditioning, relying instead on evaporative cooling all year round, said Steve Campbell-Ferguson, SVP design and engineering Global Data Centres EMEA at NTT Ltd.: "The latest technology removes the need for compressors and refrigerants," he said, pointing out that this means much reduced embodied energy and emissions in the equipment on site, and no need to use refrigerants which are greenhouse gases. "The data center will deliver a power usage effectiveness of 1.2, which is aligned with industry best practice; and uses smaller generators to generate fewer greenhouse gases," he said.

"NTT will only use guaranteed renewable power throughout the site," said Campbell-Ferguson. "The most important factor is energy and energy use".

The video tour of the site showed solar panels on the roof (which on a site such as this normally produces enough power to contribute to lighting), and a green wall of plants.

NTT is working on getting its waste heat reused, said Campbell-Ferguson, beginning with the studios next door, but potentially including local housing, if a scheme involving heat pumps can be put together: "Heat pumps are electrically driven heating systems, which displace gas boilers."

In the future, said Campbell-Ferguson, "data centers will be powered electrically from a fully neutral grid, able to support that from onsite battery systems possibly powered by hydrogen, and reusing their waste heat."

While many telcos have sold off their data center operations, NTT has increased its investment, said Maselli: "While others have divested, NTT has become the third-largest data center," he said.

NTT's data center arm has been put together from acquisitions including RagingWire in the US, e-Shelter in Europe, and NetMagic in Southeast Asia. These businesses continued to operate under their previous names for years they were rebranded under the single name NTT Global Data Centers in September last year. In August 2020, the company announced a major global building program, with nine facilities coming online in 2021, including another London build at Hemel Hempstead, and one in Madrid.