A new method to transmit vast amounts of data has been demonstrated to work.

At the 45th European Conference on Optical Communication in Dublin, Ireland, engineers from the Tokyo-based National Institute of Information and Communications Technology (NICT) optically switched data packets at speeds reaching in the petabits.

They demoed their machine's ability to use large-scale and low-loss optical switches built around micro-electro-mechanical systems (MEMS technology) and three different types of multi-core cables to achieve high speeds.

Essentially, it consists of newer multi-core cables feeding large amounts of data through a redesigned optical switch which allows the shuffling of data along different optical routes. 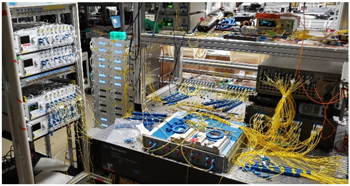 The system successfully demonstrated four fundamental scenarios that a network could face:

Engineers had to deal with the challenge of optically switching packets of petabits. This required new machinery to manage and reliably direct large amounts of data through complex networks.

Such abilities have been beyond reach for a long time because of the existing technology, until now.

This is a major step in optical technology and towards establishing a network that can support 5G or more demanding tasks, allowing the transmission of Petabits of data in mere seconds.

Due to a continuous increase in demand, the majority of traffic relies on optical networks based on single-core fiber cables and now outdated switches. A 5G network could be stifled at the point of data transfer between those cables. 5G can not have any bottlenecks in its physical infrastructure; a system is only as fast as its slowest connection.