Southern Cross begins building 16,000km cable between Australia and US

2022 completion predicted for Southern Cross Next

Construction has started on the Southern Cross Next submarine cable, which plans to provide the largest capacity data link between Sydney, Auckland and Los Angeles.

The 16,148km cable is designed to carry 72 terabits per second (Tbps) of traffic and is expected to be completed by the end 2021 or in early 2022. It will join two existing Southern Cross cables connecting Asia Pacific to the US, which have 20Tbps of capacity combined. The owner, Southern Cross Cable Network (SCCN), originally projected a capacity of 60Tbps, in the initial survey in 2017. 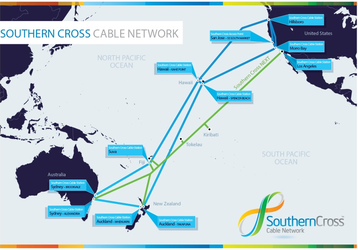 “The addition of the Southern Cross Next route to our platform will provide existing and future customers with further resiliency and connectivity options between Australia, New Zealand and the United States," Southern Cross president and CEO, Laurie Miller, said.

The $300 million cable will also provide connectivity to the Pacific Islands of Fiji, Tokelau and Kiribati. Earlier this week, Australian telco Telstra announced it had a 25 percent stake in the project and will be an anchor customer.

“We can now firmly focus on the implementation and deployment of the Next system which promises to bring greater resiliency, redundancy and capacity to our extensive network, along with the ongoing development of product enhancements to meet the evolving requirements of our customers,” Southern Cross CTO, Dean Veverka, said.

Alcatel Submarine Networks will build and deploy the cable, which will use wavelength selective switching (WSS) ROADM repeaters. The cable is designed to be compatible with future generations of submarine line terminal equipped with Probabilistic Shaping technology.

SCCN was founded in 1997 by Telecom New Zealand, Optus and MFS Globenet. According to its site, it is owned 50 percent by Spark (formerly Telecom New Zealand), 40 percent by SingTel (a Singaporean operator with other cable investments including SEA-ME-WE 5, which acquired Optus) and 10 percent by Verizon Business (which ended up as owner of Worldcom, that bought MFS Globenet). However, in 2018, Australian operator Telstra agreed bo buy a 25 percent stake in SCCN.